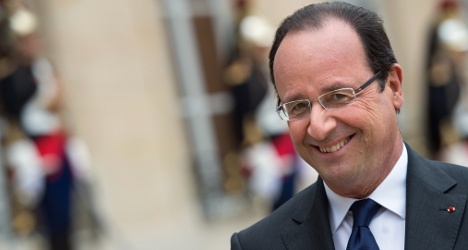 French President François Hollande smiles at a press conference in May. His popularity has finally improved, after more than 18 months of near-constant freefall. Photo: Bertrand Langlois/AFP

After more than 18 months of almost uninterrupted decline, Hollande’s image with the French people has finally seen some improvement.

“If you leave out ‘the Mali bump,’ [a brief rise in popularity in January after France’s military intervention in the west African state], the chief of state has experienced  a brutal decline on some criteria, between September 2012 and April 2013,” said the authors of the BVA survey.

“That erosion has stopped,” they added.

Comparing the survey results from May and April, the president scored slight increases on every criterion of judgment, though a majority still view him unfavourably.

His areas of greatest improvement in the eyes of the French people were in his ‘dynamism,’ and his ‘explanation of his actions.’

Some 37 percent found Hollande “competent”, up from 36 percent in April and 34 percent said he was “capable of making the decision before him,” up from 33 percent.

Although only 30 percent felt he “explains his actions well,” this was a three-point jump from April.

Some 29 percent saw Hollande as “a uniter,” up from 27 percent, while 22 percent viewed him as “dynamic,” up from just 19 percent the previous month.

Since his election last May 6th, Hollande's approval rating has fallen faster and further than any other president's since the founding of France's Fifth Republic in 1958.

The president's key problem, analysts have said, is that a growing number of French voters simply do not believe he will be able to meet his promise of turning the economy around.

After stagnating in 2012, the French economy moved into recession this year, with the International Monetary Fund predicting a contraction of 0.1 percent.

Unemployment has meanwhile grown for 24 consecutive, with the number of jobseekers surging to more than 3.2 million in March, beating a record set in 1997.

French industry has been particularly hard hit, with the symbolic closing of two blast furnaces at a steel plant in the northeastern town of Florange and thousands of job cuts at industry leaders like carmakers PSA Peugeot Citroën and Renault.

Cahuzac – once the minister responsible for tackling tax evasion – was charged in April with tax fraud after admitting to having an undeclared Swiss bank account and repeatedly lying about it.

The scandal struck at Hollande's core promise of running a clean government, and his efforts to respond, including by requiring all ministers to declare their assets, seemed to have had little effect on public opinion.