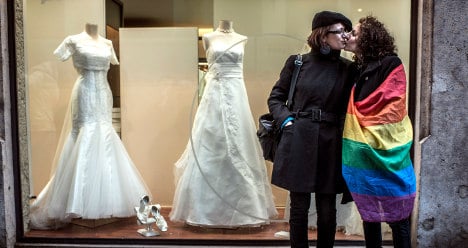 Two women kiss in front of a wedding shop in Paris. A mayor in south-western France has caused a stir by refusing to marry two men, but saying he 'might marry two girls.' Photo: Jeff Pachoud/AFP

Claude Binaud, six-time mayor of Matha, a town in the Charente-Maritime region of south-western France, has caused a stir by refusing to marry a local man, Bernard Rouhaud, and his partner, it was reported on Friday.

He qualified his refusal, however, by saying that he “might marry two girls.”

Binaud, 77, has been a consistent opponent of gay marriage, which became legal in France in May after months of fraught national debate and even violent clashes.

“There’s no doubt, I will not marry them, not two boys,” he told regional daily Sud-Ouest.

“I don’t find it [gay marriage] normal. We’re touching on something central to society here – the family,” he said.

“Two girls, I might have said yes, if my back was against the wall. But that’s totally different, they can have children,” he added.

CLICK HERE: FOR A GALLERY OF THE MOST PROVOCATIVE STATEMENTS IN FRANCE’S GAY MARRIAGE DEBATE

Binaud has assured the couple that their wedding, planned for August 3rd, will take place in Matha, but that a town councillor, rather than he himself, will be the one to officiate at it.

Binaud may find, however, that his proposed compromise solution will not pass muster with national authorities.

Earlier this week, France’s Interior Minister Manuel Valls warned mayors throughout the country that anyone refusing to marry gay couples would be in violation of the law.

As a result, they could face “significant sanctions,” up to and including a three-year prison sentence and €45,000 fine, Valls said.

He was reacting to the news that Jean-Michel Colo, mayor of Arcangues in the Pays-Basques region of south-western France had become the first French official to formally refuse to officiate at the wedding of a gay couple.