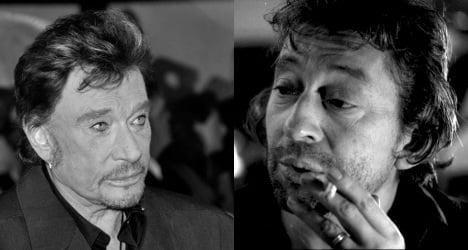 Denis Colnot is a 48-year-old Serge Gainsbourg lookalike living in the Vosges region of north-eastern France.

Ok – who are the guys they impersonate?

For the uninitiated, Serge Gainsbourg was an iconic French singer-songwriter who worked in various genres, especially during the 1960s, but is accepted as being one of the world’s most influential pop stars.

He died in 1991. Think Paul Simon, but with more stubble, more chain-smoking, and more sexual idolatry.

Johnny Hallyday is known as ‘the French Elvis,’ but in reality he’s a lot closer to being the French Neil Diamond.

He’s an absolute superstar in France and Quebec, but basically unknown everywhere else. He just celebrated his 70th birthday, to much fanfare in France.

Why are they in the news this week?

On Friday, Colnot went on trial for allegedly stabbing Pacchiana in the throat after an argument in the town of Epinal, in 2011.

You mean they’re not best friends?

That’s a negative. The two had operated in the same area for years, performing in bars and clubs and at parties, but according to reports, shared no great mutual admiration, either personal or professional.

They did, however, coexist and ploughed their lookalike furrows in the same region, trading barbs from time to time.

Pacchiana claims that Colnot was mad with jealousy over the superiority of his performances, something that Colnot has vehemently denied.

“I had won the last two competitions that we took part in, and he was livid,” Pacchiana told local daily Vosges Matin in 2012.

“When I sing as Johnny, I become a total animal on stage. Whereas Denis Colnot stays completely motionless when he impersonates Serge Gainsbourg,” he added.

How did it get from two costumed rivals, eyeing each other warily, to a knife in the throat?

Well, to put it simply, one of them encroached on the other’s turf. In the summer of 2011, Pacchiana (Johnny Hallyday), moved into Colnot’s (Gainsbourg’s) neighbourhood in Epinal.

Naturally, their mutual hatred escalated quite a bit, and Colnot took particularly grave offence when Pacchiana started performing as Hallyday at house parties in the neighbourhood.

Pacchiana was out mowing a common green area on July 23rd, when he decided to stop by at his enemy lookalike’s house for a spot of ill-advised banter.

According to reports by Europe 1 radio, Colnot gave as good as he got, but appears to have snapped when Pacchiana took a pocketful of loose change, and distainfully tossed it towards Colnot.

The brooding, angry Gainsbourg impersonator rushed inside the house, grabbed a knife, and stabbed Pacchiana in the throat, just missing his carotid artery.

“I was miraculously cured. I thought I was going to join my mom up in heaven,” he told Vosges Matin.

Colnot’s trial began on Friday, and he could serve up to 30 years in prison if found guilty, although he has repeatedly expressed remorse about the attack.

Much of the case revolves around whether Colnot’s actions were premeditated.

His lawyer, Gérard Weltzer has claimed he “blew a fuse,” and wasn’t in full control when he stabbed Pacchiana, and also that he was an “emotionally-fragile” person to begin with.

Pacchiana’s lawyer Julie Picard, however, doesn’t buy it, claiming that in the run-up to the fateful day, Colnot had told a third party he wanted to kill Pacchiana.

“He planted the knife in my client's throat, went back inside, cleaned it, and waited for the police to arrive. That suggests some reflection on his part,” she told Vosges Matin.