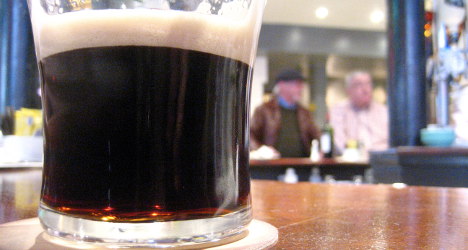 "“It used to nearly be enough just to be Scottish. But that was five or six years ago," says Michele Connelly from The Highlander Scottish pub in Paris. File photo: Timothy Boyd

You might have years of experience behind the bar, or you might be exploring your career options after graduation.  Either way, working in an expat bar in France is a popular choice for new arrivals from the UK, Ireland, Australia and North America.

It's seen by many as the perfect gig – fun, easy, and a great way to avoid having to speak French. But it's not as simple as that, of course.

The Local has gathered some invaluable pearls of wisdom from three expats working in expat bars in France.

1.    Sort out your accommodation first

Nobody will hire bar staff who are liable to end up sleeping on couches in the bar.

Before you present yourself at an expat pub, get yourself set up in an apartment first. “I won’t hire anyone who’s a drifter,” says Michele Connelly, Canadian general manager of three Scottish bars in Paris.

2.     Easy on the emails, and knock on doors after you arrive in France

“Your personality is the key factor in getting a job in a bar,” says Connelly.

So while you might think you’re getting ahead of the game by peppering bar-owners with emails before you leave for France, wait until you’ve arrived to make your first impression in person, since the manager will find it hard to judge your suitability through your emails.

3.     Don’t be discouraged if you lack experience

“Of the last four people I hired, only two of them had previous experience in a bar,” says Englishman Jonathan David-Slate, who works at The Shakespeare English pub in Montpellier.

Connelly agrees, adding that what really matters is your attitude. “You may have been working behind the bar for years, but that could just mean you’ve developed bad habits, and learned all the old tricks for getting away with being lazy,” she says.

4.     You don’t have to be a fluent French speaker, but you can’t get away with having none.

“There is a certain amount of truth to the myth that expats who work in expat bars can get away with only speaking English,” says Peter Boxsell, Australian general manager of Café Oz at Denfert-Rochereau in Paris.

“But having some French helps everything go a bit smoother with French customers, and I make a point of hiring staff who are at least partially bilingual,” he adds.

“Most French customers who come to expat bars do it specifically because they want to speak and practice their English,” says Connelly.

“But I’m seeing more and more applications from people who seem to have really good French, so don’t think you can arrive without a word of the language and get a job just like that,” she adds.

If you’re Irish, for example, and you want to live in France, getting a job in an Irish pub has for years been seen as an easy way to go.

You speak the language, you know the names of all the drinks, and you have the right passport – what could be simpler?

Not the case anymore, says Connelly, who runs The Highlander, along with two other pubs in the capital.

“It used to nearly be enough just to be Scottish. But that was five or six years ago. This year, especially, I’m receiving more job applications than ever. I don’t know whether it’s the economic crisis, but for whatever reason, the competition is getting really tough out there,” she adds.

France, especially big cities like Paris, is a place that by its nature attracts well-travelled expats and visitors from every imaginable background and culture.

So it helps if you’ve lived a little yourself, says Connelly.

“People love sitting at the bar and sharing stories. If you’re young or you haven’t experienced much, or you’ve been in the same small town for years, you’re going to find it difficult to keep up,” she says.

“On the other hand, if you’ve travelled a bit and have some insight into different cultures, you’ll really thrive. I just hired someone who had lived in Haiti for a few months, working with oprhans, and I remember that really stood out for me,” she adds.

7.     Don’t expect the pace of pubs in France to be the same as back home

If you’re working in a clubbing hotspot in a big French city, you’ll probably be kept on your toes at all times as a member of staff.

But depending on where you are, and how many expats live in that area, you might find the pace a little less chaotic than you’re used to in the UK, Ireland, or Australia.

“The French have a different mentality to drinking,” says David-Slate. “They’re not constantly going back to the bar to refill their empty glass, as we do in England.”

So if you’re used to a persistent high pace, or if you get off on the challenge of serving two rows of thirsty, impatient customers shoving money in your face, then you should learn to expect some slow shifts in France, even in an expat pub.

Michele Connelly, originally from Canada but with Scottish parents, runs The Highlander, The Thistle, and The Auld Alliance pubs in Paris.

Peter Boxsell, from Sydney, Australia, is general manager of Café Oz at Denfert-Rochereau in Paris.

Jonathan David-Slate, from Kent in England, works at The Shakespeare English pub in the southern city of Montpellier.