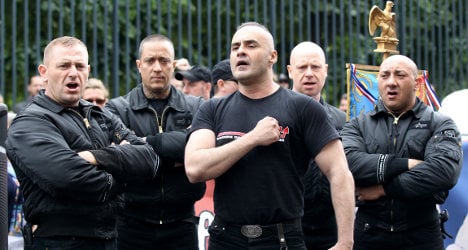 Far-right French militant Serge Ayoub (C, hand on chest), surrounded by members of his group, JNR, which has been threatened with dissolution after the death of Clément Méric. Photo: Thomas Samson/AFP

As soon as the far-right militant group, Jeunesses Nationalistes Revolutionnaires (Revolutionary Nationalist Youth, or JNR) were implicated in an attack in Paris which last week killed 18-year-old anti-fascist activist and student Clément Méric, there were calls for them to be disbanded.

As leading figures on France’s far-right deny any involvement by JNR in the death of Méric, the Socialist government of French President François Hollande plans to outlaw JNR and the far-right group Troisieme Voie (Third Way) at a cabinet meeting later this month.

There has been widespread scepticism in France, however, that such a move would be effective in removing the members of JNR from French public life, and taking on far-right extremism at large.

The Local assembled three leading experts, asked them to consider a ban on far-right militant groups such as JNR, then posed the question: could it work?

Magali Balent, lecturer at Sciences Po in Paris, and an expert on French far-right extremism

When it comes to banning a far-right group after a major incident, the first thing I should say is that France has done it before, of course.

In 2002, we had the attempted assassination of [then French President] Jacques Chirac by Maxime Brunerie, a member of the far-right Unité Radicale, which the government later disbanded.

However, some of its members simply regrouped and reformed under the new name of the Bloc Identitaire.

So while there is a recent precedent in France for banning far-right groups, we can’t say for sure it would be effective today, if the members of JNR or another group could just reconstitute themselves under a different name.

The second difficulty with disbanding a group like JNR, is establishing a strong, definitive link between them and the death of Clément Méric, since that’s the catalyst for calls to ban them.

One of their leaders, Serge Ayoub, has been in the French media over recent days, denying all involvement by JNR in the death of Méric.

So if the main trigger for banning a group is this traumatic event – the death of Clément Méric – it might be very difficult to outlaw them unless you can prove a link between his death and the organization.

JNR is ‘more like a militia than a political group’

However, the third important thing to bear in mind about a group like JNR, and what could allow the French government to outlaw them, is that they are basically not a political group.

They only have around 30 members, and they’re more like a militia than anything else. This status could make it easier for the government to ban them.

Magali Balent is a lecturer at Sciences Po university in Paris, and a senior research fellow at the Institut de Relations Internationales et Strategiques (Institute on International and Strategic Relations). She is a specialist in far-right extremism and nationalism in Europe.

The first problem with these groups is that there is a lot of fluidity between them.

It appears that some double or even triple membership is possible, and there are certainly links between them in terms of their leadership and shared history.

So it’s difficult to say whether a ban on an organization like JNR, for example, which has links to the Third Way, would be effective.

If we look at other European countries which have had far-right groups, and outlawed them, it can be effective where the group has a very small membership – 10 to 200 people – and where they’re not particularly well rooted in society.

But look at a larger, well-funded group like the [anti-immigration, Flemish nationalist] Vlaams Blok in Belgium.

[After a court found it guilty of discrimination in 2004], its members simply renamed their organization Vlaams Belang.

France would also need to be careful that by banning a particular group, they didn’t make it a big symbol of the movement’s struggle, or something like that.

On the other hand, if it can be proven that a particular group is violent, that they are challenging France’s basic liberal and democratic principles, and that they are physically targeting individuals, then I would say the government is entitled to do something about it.

There has been a rise in racism and anti-semitism in France recently, and someone should be held responsible for that.

I would recommend setting up a commission to investigate JNR, the Third Way and other extreme-right groups.

Ultimately, if they find that it’s feasible, if they uncover proof that the group is violent, and fundamentally breaking the rules of French society, then France could outlaw them.

Dr. Andrea Mammone is a lecturer in modern European history at Royal Holloway University of London. He is a leading expert on European neofascism and far-right groups, as well as Italian politics. “Transnational Neofascism in France and Italy” is forthcoming on Cambridge University Press.

In terms of French law, there are a few different provisions for banning groups such as JNR, and French history has a number of precedents for it.

First of all, a 1936 law authorises the government to dissolve any group that presents a danger to public order – especially paramilitary groups.

It allows for symbolic and legal punishments, and would allow the government to send a clear message about extremist groups.

That law has the potential to be a real legal weapon for the government, but only as a last resort, because it could be seen as violating a group’s right to free association.

We’ve seen it used in exceptional circumstances before, such as when the French government banned an extremist Islamist group a year or two ago, and in the case of Unité Radicale.

Banning an idea is a different matter

However, whether or not these legal tools can be effective in eliminating the beliefs held by far-right groups is a different question.

The ideas will always remain, in one form or another, and we have seen in the past organizations simply regroup under a different name.

If the French government bans groups such as JNR now, they will also deny themselves certain methods to keep them under control.

If the group you’re targeting doesn’t officially exist anymore, it’s harder to put pressure on them, and you certainly can’t for example, get intelligence about their plans by infiltrating them.

Ultimately, outlawing a far-right group like JNR might give the government and the French people plenty of immediate satisfaction, but it won’t suppress their doctrine or wipe out their ideas in the long-term.

Pascal Jan is a leading expert on French constitutional law, and a lecturer at Sciences Po university in Bordeaux. He runs the website ‘Droit Public’ (Public law).