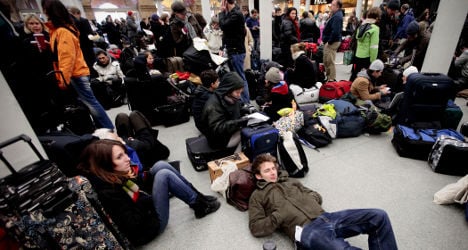 Air and rail travelers in and out of France can expect plenty of waiting on cancelled flights and trains this week, as strikes continued on June 12th. File photo: Carl Court/AFP
Up to three quarters of all flights coming into and out of French airports were expected to be cancelled on Wednesday, for the second consecutive day since four days of industrial action began on Tuesday.
There was some good news for travelers, however, as the SNCTA union announced on Tuesday evening that airport strikes would end on Thursday morning, a day earlier than predicted, after French Transport Minister Frédéric Cuvillier asked his German counterpart to suspend European Commission plans to liberalize the aviation sector.
France's Directorate-General of Civil Aviation (DGAC) reminded airlines on Tuesday evening that their demand for a 50-percent reduction in flights would remain in place on Wednesday, and said in a statement it did not predict a return to normality until Thursday, a day earlier than the strike by airport staff had initially been planned to end.
Despite the 50-percent benchmark, however, disruption appears to have intensified throughout the day, with the DGAC releasing a statement on Wednesday afternoon that three out of every four flights were being cancelled in France.
"It is important that travelers do not go to the airport without first consulting their airlines," a spokesman for the Paris region's airports told French daily Le Parisien.
In Paris, the affected airports are Roissy-Charles de Gaulle, Orly, and Beauvais, with cancellations also taking place in Lyon, Nice, Marseille, Toulouse and Bordeaux.

A spokesperson for Aéroports de Paris on Wednesday confirmed that dozens of flights had already been cancelled at Roissy-Charles de Gaulle and Orly airports.

While some 1,800 flights were cut throughout France on Tuesday, that number could come close to doubling on Wednesday, due to an increased volume of air traffic, with as many as 3,500 flights affected by industrial action.

Furthermore, thousands of significant delays were expected throughout France and Europe on Wednesday.

On Tuesday, low-cost outfits Ryanair and EasyJet cut 102 and 128 flights respectively, in and out of France.

National air carrier Air France claimed on Tuesday to have protected its long-haul flights, but stated on the company website that it couldn’t rule out further “last-minute delays and cancellations.”

Travel in and out of France could be even more severely disrupted on Wednesday evening, due to a separate strike by rail workers associated with national train network SNCF. The company said in a statement on Wednesday that travelers should expect just four out of every ten TGV and TER trains to run, and three out of every ten Intercity journeys to take place.

The rail strike, slated to last from 7pm French time on Wednesday until 8am French time on Friday, should not disrupt the Eurostar, Thalys or Alléo services between Paris, London, Brussels and Germany, but will cause significant disruption to other routes.

The following is a breakdown of journey frequency on France's rail network, according to French television TF1.

For details specifically on stations in the Paris region, consult http://www.abcdtrains.com/