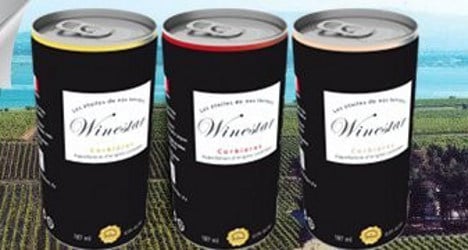 The three available brands of Winestar wine in a can. Photo: Screengrab/Winestar.fr

Winemakers at the Château de l'Ille in the Languedoc-Roussillon department of southeastern France are behind the bold move, which involves packaging AOC wine in cans.

AOC ("appelation d'origine controlée") is a special label given to a selected number of products by the French government, and indicates that this wine in a can is no watered-down swill, but rather meets a set of strict production standards and guidelines.

The three cans, with the colour of the rim corresponding to the type of wine inside, will be launched by the company Winestar at the Vinexpo conference in Bordeaux this weekend. A pink rim signifes the rosé, for example.

"We want to become the Nespresso of wine," Cédric Segal, co-founder of the company behind the innovation, Fabulous Brands, told French daily Le Figaro.

The move is an attempt to lasso younger generations of would-be wine lovers, as the small cans are so easily carried in a handbag or rucksack, and they sell at €2.50 each.

"They don't consume wine in the same way as their elders do, but they are equally demanding about quality," said the company Winestar in a statement.

"They particularly like having a drink in places that correspond to their nomadic party lifestyle – a picknic on the beach, a walk in the forest, or even when you snatch a bite to eat on the hoof."

The winemakers are led by Pol Flandroy, who has more than three decades of experiences in the field and more than 200 medals testifying to his expertise.

The fruity red is entitled Cuvée Andréas, while the white is a Cuvée Emilie, with notes of pineapple and grapefruit. Finally, the Cuvée Alexandre rosé is characterized by red-fruit notes.

While cans are more often associated soft drinks and sodas, Winestar have managed to get Ball Packaging Europe to engineer the can and protect the Chateau d'Ille wines. The can has an extra layer on the inside to protect the beverage.

The can is also the most recycled item of packaging in the world, which the French winemakers have hastened to underscore as an eco-friendly point in its favour.