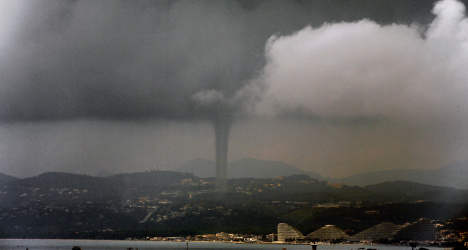 A tornado looms over the Marina Baie des Anges in the southern French city of Nice on June 9th. Photo: Valery Hache/AFP

For a few hours over the weekend, visitors and residents of the Côte d'Azur in southern France were greeted by the spectacular sight of tornadoes and waterspouts off the Mediterranean coast (see video below.)

It’s a relatively rare phenomenon for this part of the world, happening just once a year on average, according Météo France, the national meteorological service.

However, between noon and 4pm French time, tornadoes and waterspouts were filmed and photographed, passing between Nice, Antibes, St. Paul du Vence, Cagnes-sur-Mer, and Cannes.

This video shows a tornado off  the coast of Antibes, between Cannes and Nice.

The following video was taken at Cagnes-sur-Mer on Sunday afternoon.

This image of a waterspout over Nice was sent to us by reader Nicky Taylor in Antibes.

This is a map of the Côte d'Azur, charting the area affected by the tornadoes on Sunday afternoon. (Google Maps)

Do you live on the Côte d'Azur? Send your tornado pictures to [email protected]