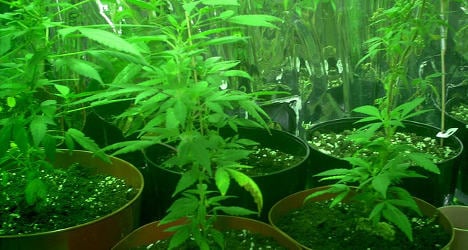 A French allowing the sale of medicinal, cannabis-based products, went into effect over the weekend. File photo: highguy420_flickr

The French will likely see inhaler products, for example, among the applications of the drug. There will also likely be pills and infusions on the shelves of certain pharmacies across France.

“These products will be given only on prescription and only when no other treatments are relieving the patient’s suffering,” noted online magazine StreetPress, in presenting a review of medicines based on cannabis sativa already available on the market abroad.

In March, the drugmaker Bayer increased its production of the oral spray Sativex fifty-fold after France announced it planned to relax the law. The product has already been sold in Canada for the past eight years, while German patients have had access to it since 2010.

A second batch of medication that may end up on French shelves, use petals or leaves of the plant in their natural shape. Bedrocan, Bedica, Bediol, and Bedrobinol have already been used by patients in the Netherlands, Italy, and Finland.

The flowers are grown by a company called Bedrocan BV, which was given permission to cultivate cannabis by the Dutch health ministry in 2005.  The dried flowers can be used as a tea, allowing the active substances to be released in an infusion.

One of the earlier types of cannabis treatment was originally used to help Aids sufferers regain their appetite.

The Marinal pill or capsule, now traded with the name Cesamet, has been available since 1992. It is already legal in several of France’s neighbours, including Germany, Italy, the UK and Spain.

The move to legalize the use of cannabis for medical purposes went into effect on Saturday.

The rewrite, proposed by Health Minister Marisol Touraine, decriminalizes  "the production, transport, export, possession, offering, acquisition or use of speciality pharmaceutials that contains one of these (cannabis-derivative) substances”.

Yet all the available products must still be greenlighted by the National Medical Safety Agency (Agence nationale de sécurité du médicament– ANSM).

“The law allows us above all to unblock the process of launching research into cannabinoids,” Pharmacists’ Union spokesperson Philippe Gaertner told StreetPress.

“I’m not sure we’ll have these medicines on the market quickly.”