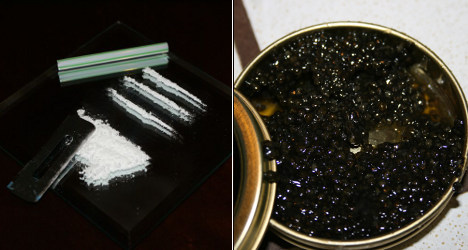 Cyril de Lalagade, 43, heir to the Volga caviar company, which runs ‘La Maison du Caviar’ restaurant in Paris, is set to go on trial on Monday for multiple charges of rape, sexual abuse and torture against two young women.

The women claimed that between 2005 and 2009, Lalagade ‘force-fed’ them drugs and coerced them into violent sex which they were physically unable to resist.

At some of Lalagade’s now-notorious sex-and-drugs parties in luxury hotels and apartments in the French capital, he allegedly inflicted treatment on the women which amounted to “rape with several aggravating factors, as well as torture or acts of barbarism,” according French TV TF1.

The women, named only as Jennifer and Inès and both aged in their late 20s, claimed that Lalagade would regularly tie them up and engage in sadomasochistic sex, sometimes involving a blowtorch, hot wax and a cigarette lighter.

Lalagade, a known cocaine-addict, was sentenced to three years in prison in 2008 for trafficking drugs, after a series of run-ins with French narcotics police since the 1990s.

At the time, he admitted “I took too much cocaine and like beautiful girls,” but denied ever forcing any of his hand-picked female guests into sex, claiming “I only know easy girls.”

One beckoning text message to his accuser, Inès, read “the table is full of [cocaine], come over quickly, little sister. We’re waiting for you. I’m hung like a horse. Come quickly,” according to French daily Le Monde.

Lalagade had been set to stand trial on the rape and torture charges in 2012 – charges that he denies – but a dramatic courtroom outburst, in which one of his alleged victims recanted and shouted “he did nothing wrong”, caused a delay in proceedings until Monday.

In 1956, he opened La Maison du Caviar in the 8th arrondissement of Paris, at the behest of the Shah of Iran, this time for the purpose of exporting Iranian caviar to an elite French audience.

After his parents’ divorce, Cyril de Lalagade was raised by his doting grandmother, and given the equivalent of €7,000 a month for a nominal job within the company.

A handsome jetset young man with ready cash and a voracious appetite for drugs and women, Lalagade’s behaviour quickly spiralled out of control, leading to, among other run-ins, an FBI drug bust which he escaped by sneaking on to a transatlantic boat back to France in 2000.