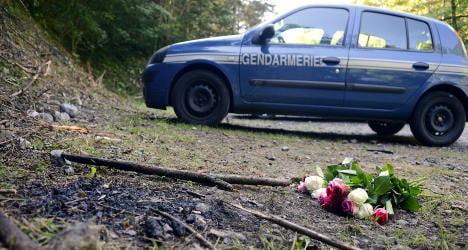 Flowers placed at the scene near Chevaline in the French Alps where the British Iraqi family were gunned down along with a French cyclist. Photo: AFP

Police probing the murder of a British-Iraqi family in the French Alps last year are looking into telephone calls to Romania made from the phone of the brother of one of the victims, the prosecutor in charge of the investigation said Monday.

Annecy Prosecutor Eric Maillaud said Romanian authorities had been asked to help establish who Zaid al-Hilli, the brother of Saad al-Hilli, had apparently been calling but they had not been able to identify the numbers.

"There were calls made from the phone of Saad al-Hilli's brother to Romania," Maillaud told AFP. "A formal request for assistance was made to Romania several months ago but so far it has not produced anything."

Maillaud stressed that the Romania link was not being treated as a major new lead.

"It is simply that we can leave no stone unturned," he said. "This is part of the masses of data we are gathering month after month.

Maillaud has in the past mooted the possibility of the shooting having been the work of a "low-cost killer" from eastern Europe, although he has always stressed the lack of any firm evidence to back up that theory.

Maillaud's team believe that Saad al-Hilli was embroiled in a dispute with his brother over a family inheritance which could have provided a motive for the murder.

According to Maillaud, Saad and Zaid's father wrote two draft wills, one of which left Saad with nothing and one which envisaged a fair split of assets
worth several million euros.

Zaid al-Hilli denies any feud with his brother. British police have spoken to him as part of their inquiries but have given no indication that they consider him a suspect.

Maillaud said that, for that reason, Zaid al-Hilli had not been asked to explain the calls from his phone to Romania.

"Those are the type of questions that cannot be asked of a witness in Britain," the prosecutor said. "He would have to be considered a suspect."

Saad al-Hilli, his wife Iqbal and her mother Suhaila al-Allaf were shot dead in the family estate car at a beauty spot near Lake Annecy on September 5th.

Their two young daughters survived the shooting, in which a French cyclist was also slain.

Police believe the cyclist, Sylvain Moller, was not a target and was shot because he was "in the wrong place at the wrong time."

The attack bore some of the hallmarks of a professional assassination with the victims all having been shot in the head and at close range.

But detectives have admitted to being puzzled as to why the gunman unleashed at least 25 shots, which is incompatible with the idea of him or her being a highly trained professional.