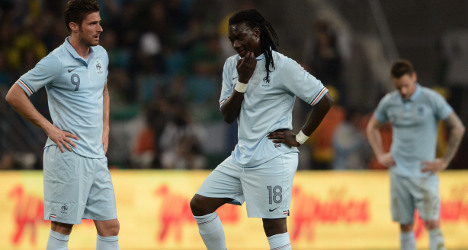 France's Olivier Giroud (L) and Bafetimbi Gomis react to another Brazilian goal in their 3-0 defeat at the Maracana on June 9th. Photo: Franck Fife/AFP

Goals from Chelsea midfielder Oscar, Lazio's Hernanes and Lucas Moura from the spot saw Brazil beat France 3-0 on Sunday to ensure the French ended their brief trip to South America without a win or a goal.

Having drawn with England 2-2 at the official unveiling of the refurbished Maracana stadium, Brazil prepared to host the Confederations Cup in style with a comfortable victory.

For France it was more disappointment following their 1-0 reverse against Uruguay four days earlier.

The result was no more than Brazil deserved in a match in which they were far the better side against limited opponents with limited ambition.

"There was no photo (finish), we tried to fight in the first half but we were dominated," said France striker Karim Benzema.

"It's tough losing 3-0. We tried in the first half, we didn't score and little by little, we collapsed."

Brazil were typically dominant but struggled to find a finishing touch in the first half.

Zenit St Petersburg striker Hulk was dangerous down the right and on one occasion cut inside on to his favourite left foot but blazed over.

New Barcelona signing Neymar used his tricks and speed to dazzle the visiting defence but he was wayward with his finishing, sending a free-kick straight into the wall before too clearing the bar with another effort.

Oscar tricked his way down the right on the outside of full back Jeremy Mathieu and picked out Neymar at the back post but Mathieu Debuchy recovered just in time to whisk the ball off the Brazilian striker's toe and prod it behind.

Neymar was coming in for some rough treatment as a close-up of his sock near the end of the first period showed a huge hole. Yet it was Brazil defender David Luiz who was the first to be penalized for his aggressive approach as he was booked for hacking through the back of Benzema.

France midfielder Joshua Guilavogui, on his first start for the national team, had the visitors' best opening but scuffed his 22-yard shot wide.

France may have survived the first period but Brazil stepped up a gear in the second.

Hulk flashed a shot wide of the upright but the Brazilians took the lead on 54 minutes.

Fred crossed from the left and Oscar ghosted in between France centre-backs Adil Rami and Mamadou Sakho before cooly controlling the ball, turning and slotting home.

He could have had a second soon afterwards but his touch on Hulk's cross from the right fizzed past the far post.

That sparked a French reaction but it was Luiz who came closest to scoring as he almost turned Mathieu Valbuena's cross past his own goalkeeper Julio Cesar, who made an instinctive block.

France goalkeeper Hugo Lloris kept his team in it with a crucial double block from Fred and then Neymar after Rami was caught out of position.

The killer second arrived five minutes from time as substitute Hernanes curled home in off the far post before fellow replacement Bernard wasted a glorious chance by shooting tamely at Lloris.

There was still time for Debuchy to fell Marcelo in the box and gift Brazil a stoppage time penalty that Paris Saint-Germain star Lucas casually rolled into the bottom corner.