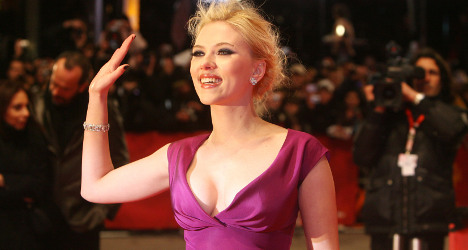 US movie superstar and sex symbol Scarlett Johansson, pictured in 2008, is suing a French editor over a novel which uses her identity for one of its characters. Photo: J MacDougall/AFP

US movie megastar Scarlett Johansson is suing Jean-Claude Lattès, the editor of ‘La première chose qu’on regarde’ (The first thing you look at), a novel by Grégoire Delacourt, it was revealed on Friday.

The actor has filed a complaint against the publisher for violation and fraudulent exploitation of her personal rights, according to French radio RTL.

Delacourt’s novel depicts the 'Avengers' and 'Lost in Translation' star falling in love with a garage-owner in the Somme department of northern France.

During the course of their affair, it is revealed that the woman in question is not in fact the 28-year-old sex symbol, but rather a young French girl named Janine Fauquempré, who happens to look exactly like her, and takes on her persona.

Delacourt, the novel’s author, told RTL he was taken aback by the reaction of Johansson, and denied the book was cheap or opportunistic.

“This is a true love story, with real, romantic characters,” he said.

“It’s a bit silly to say that if you talk about a person, the courts have to get involved. That’s quite sad,” he added.

In a message addressed directly to Johansson, who was named ‘Sexiest Woman Alive’ by Esquire magazine in 2006, Delacourt kept it simple.

“I love you,” he concluded.