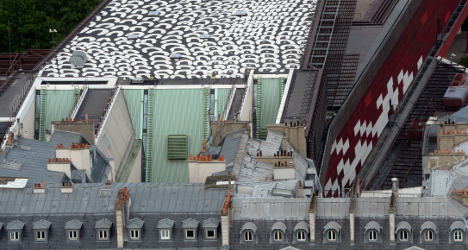 From June 6th, this work by Australian artist Lena Nyadbi on the roof of the Quai Branly, will be visible from the tower. Photo: Pierre Andrieu/AFP

Visitors to the Eiffel Tower get a little extra for the price of their entry ticket from Thursday with the unveiling of a new landmark on Paris's artistic landscape — or skyscape.

The new art work has been installed on a roof at the Quai Branly museum on the banks of the Seine, just a stone's throw from the iconic tower that is visited by more than seven million people every year.

From Thursday evening, those visitors will be able to admire a massive enlargement of a work by Australian Aboriginal artist Lena Nyadbi which has been stencilled on to the roof using rubberized paint.

The 700-square-metre (7,500 sq. ft) installation has been specifically designed so that it will be visible from several different levels of the tower.

Its prominence at the centre of a city regarded as the art capital of the world will make it likely to become the best known example of the art of Australia's indigenous peoples, described by the late critic Robert Hughes as "the last great art movement of the 20th Century."

As such, it also represents remarkable recognition for Nyadbi, an artist now in her late 70s who began her working life as a labourer on the arid cattle stations of northwestern Australia.

Her black and white abstract piece is entitled Dayiwul Lirlmim (Barramundi Scales) and is 46 times bigger than the ochre and charcoal original created as a visual interpretation of a creation story from the Gija people of Western Australia.

In the story, three women try to catch a barramundi. The fish gets away from the women but, as it escapes over rocks, it scatters its scales across the territory of the Gija in the East Kimberley region of Western Australia, thus providing an explanation of why that region came to be one of the world's leading sources of diamonds.

Nyadbi's work is already a permanent fixture in the museum as she created a mural, Jimbirla and Gemerre (spearheads and scarifications), that adorns one of the external walls.

Works by seven other Australian Aboriginal artists are featured on ceilings throughout the museum.

"I had a few nerves last week when it was still raining –  we badly needed a few dry days to get it finished."

To mark the opening of the new rooftop installation, Australia's embassy in Paris is hosting a parallel exhibition of works by eight Gija artists.