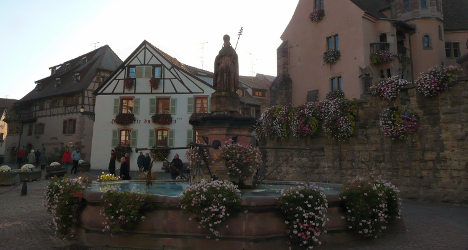 Do you know where this is? French TV viewers just gave it the title of 'France's favourite village' for 2013. Photo: Russ Bowling

After around 150,000 online votes were counted, the commune in the Haut-Rhin department in eastern France, had fought off competition from 21 postcard-perfect towns to take home the coveted title.

Eguisheim mayor Claude Centlivre shared his joy in the aftermath of the victory on Wednesday.

“We’re very happy about this, obviously,” he told The Local. “The village is already quite well known, but we’re looking forward to welcoming even more visitors this summer,” he added.

IN PICTURES: SEE ALL THE FINALISTS FOR FRANCE'S MOST BEAUTIFUL VILLAGES – 2013

Eguisheim, which has a population of just 1,600 and an area of only 14 sq. km, is known to tourists and oenophiles as a good source of Alsace wine.

The prize of “France’s favourite village” is more than just honorary, however.

Last year’s winner, Saint-Cirq Lapopie in the south-western department of the Lot, enjoyed an 87 percent increase in tourist visits in July, and 40 percent in August, compared to figures for 2011, according to the local tourism office.