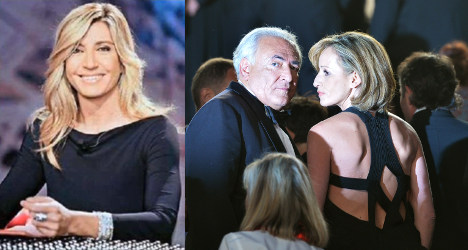 Myrta Merlino claimed Strauss-Kahn, known as DSK in France, sexually assaulted her in his swanky hotel suite on the fringes of the annual World Economic Forum in Davos, Switzerland, on an unspecified date in the “late 1990s.”

The journalist, now aged 44, made the accusations in a Youtube interview with Italian journalist Klaus Davi.

She alleges that in looking for an interview with DSK during the course of the conference, she had caught his eye.

Then, after luring her to his hotel suite with the promise of an interview, DSK demanded that the photographer who had been accompanying Merlino stay outside the room.

“I sat down in an armchair. He offered me a big glass of champagne, and we began talking about everything except for the interview,” said Merlino, according to a French translation by French daily Le Parisien.

“Then DSK told me he adored journalists. I replied that his wife was a terrific woman and journalist,” she said, in reference to DSK’s then wife, French-American TV journalist Anne Sinclair, who divorced him earlier this year.

“Then I got up and, pushing me violently against the wall, he tried to kiss me,” said Merlino.

“I gave him a violent slap, I stormed off and with great difficulty, fled [from the room]” she added.

Merlino went on to say she was shocked by the assault and very angry about what she called the “psychological violence of a powerful man.”

For his part, DSK’s lawyer Richard Malka told French weekly Le Point, which first reported the story in the French media, that he was not “abreast of developments” and had no comment to make.

Merlion’s claims come after DSK made something of a return to French public life recently, making a rare and unexpected appearance at the Cannes film festival two weeks.

DSK, 64, was accompanied on the red carpet by his new girlfriend, the Morocco-born French marketing executive Myriam l’Aouffir, 45.