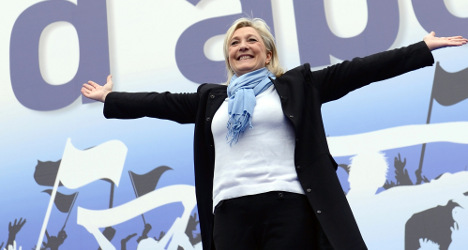 Marine Le Pen, leader of the far-right National Front, at a May Day rally in Paris. Her party matched the two mainstream French parties in polls on June 5th. Photo: Eric Feferberg/AFP

The survey revealed that the far-right National Front, the governing Socialist party, and the main centre-right opposition UMP were neck-and-neck on exactly 21 percent each of public support.

Public opinion firm Ifop, along with right-leaning weekly magazine Valeurs Actuelles asked respondents to choose from a series of party lists, with specific named leaders, “if the European elections were to take place next Sunday.”

Some 21 percent chose the Socialist Party, led by Party President Harlem Désir, the same percentage of support given to both the UMP, led by Jean-François Copé and the National Front, led by Marine Le Pen.

The UDI (Union of Democrats and Independents), a splinter party formed during the UMP’s fraught leadership battle last autumn, and led by Jean-Louis Borloo, polled at 6.5 percent.

Hollande has suffered record unpopularity among French voters, amid historic levels of unemployment and a tax evasion scandal which forced former budget minister and key ally Jérome Cahuzac to resign in April.

For his part, Copé had to endure a poisonous battle with former Prime Minister François Fillon in order to become UMP leader last autumn.

In May, The Local reported that former President Nicolas Sarkozy, who has somewhat overshadowed Copé’s leadership with repeated hints at a return to politics, topped a poll of French voters asked to choose their preferred president in 2017.

"Behind lofty, misleading comments against bankers, she only becomes concrete when it's about attacking unions and immigrants," he said in a statement.

In February, The Local reported how the National Front has opened up a ‘candidate’s college’ called “Campus Bleu Marine,” in an effort to boost the party’s representation in local authorities throughout France.

Le Pen garnered 18 percent of the vote in last May’s presidential election, just failing to replicate the performance of her father, and party founder, Jean-Marie Le Pen on the same stage.

In 2002, Jean-Marie Le Pen sent shockwaves throughout the political world by outpolling Socialist candidate and incumbent French Prime Minister Lionel Jospin in the first round of the presidential elections.

Incumbent centre-right President Jacques Chirac went on to get 82 percent of votes in the run-off election.