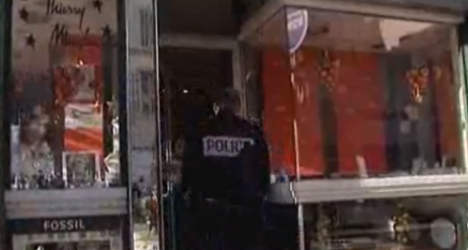 A police officer enters a jewelry shop on rue de Rome in Marseille, where an armed gang, some disguised as rabbis, executed a frightening robbery on June 5th. Photo: Eric Dehorter/Youtube

A four-person gang of thieves executed a bizarre and frightening armed robbery in the southern city of Marseille on Wednesday, taking a 70-year-old man hostage while they stole jewellery of unknown value from his shop.

The gang surprised the businessman outside his apartment building on Avenue Cantini in the centre of Marseille, taking him captive at gun-point, before spraying an “irritant gas” in the vicinity and driving off to the elderly man’s shop, identified by France 3 TV as the Gabetti Bijouterie.

While each member of the gang was equipped with a Kalashnikov rifle, two were allegedly “disguised as rabbis,” according to TF1 television.

It is not known whether this disguise was incidental, or part of a strategy to rob from the jeweller, who TF1 claims is himself Jewish.

After helping themselves to jewellery at the elderly man’s shop on rue de Rome, the thieves fled towards the A50 motorway, abandoning him at a petrol station along the way, according to regional daily La Provence.

The victim, suffering from shock and bearing a number of bruises, was transported to hospital.

Back at the victim’s apartment building, some 50 local firemen, alerted to a strange smell by residents, were forced to evacuate around 30 people from the apartment block, and 11 were confined to their homes for a period.

A number of inhabitants of the building suffered respiratory difficulties and irritated eyes, and two were taken to hospîtal while the rest were treated at the scene.

The brigade de répression du banditisme (violent crime division) of the local police have taken over the investigation, and an assessment is under way of the losses suffered by the elderly jewelry shop owner.