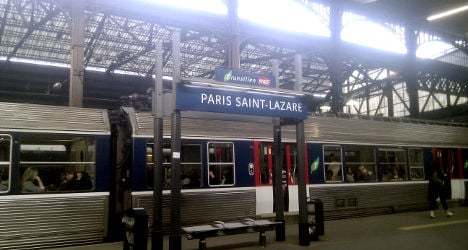 National rail operators SNCF said travelers and commuters could expect some measure of disruption until noon on Wednesday, but that traffic was beginning to go back to normal.

About nine out of every ten trains heading west for Normandy had completed the journey since 7.30am.

Traffic was also up and running on routes to Vernon, Rouen,  Le Havre, and Dieppe.

A sudden work stoppage by SNCF train conductors at Paris Saint-Lazare station on Tuesday evening caused significant disruption to rush-hour traffic in and around the French capital. The unexpected industrial action was due to concerns among SNCF staff after an attack on a ticket inspector in the suburbs of Paris on Monday, according to BFMTV.

SNCF announced on its website and through Twitter on Tuesday that "traffic is disrupted on the entire 'Reseau Saint-Lazare," the network of lines starting from the station, including both suburban and inter-city routes.

Almost half a million people pass through the Saint-Lazare train station every day, making it one of France and Europe's busiest transport hubs.

As a throng of commuters awaited updated rail updates last night, the rail company recommended that travelers and commuters plan to avoid Saint-Lazare station and make travel arrangements which don't involve passing through it.

The injured ticket inspector was attacked and had his nose broken by a passenger travelling without a ticket, as he approached the Mantes la Jolie station at Yvelines, in the suburbs of Paris at around 7.20am on Monday.

At the time, inspectors and union leaders met with management from SNCF, and Tuesday evening's work stoppage appeared to have involved conductors joining inspectors in solidarity with the victim of Monday's attack.