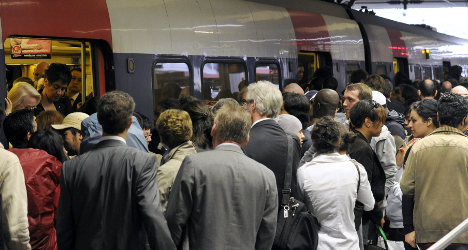 File photo from a strike in June 2011. Commuters at Paris Gare du Nord crowd in and out of an RER B train, heading towards Charles de Gaulle airport. Photo: Bertrand Guay

Train traffic in and around Paris has been “disrupted” on Monday morning, amid a strike by train conductors from the RATP rail company.

Just one out of every two rush-hour trains have been running on the RER B line, which connects the French capital to its north-eastern and south-western suburbs, and Charles de Gaulle airport.

Delays in the direction of the airport were said to be at least 30 minutes during rush hour on Monday morning.

“I’m used to it. The RER B is the champion of delays,” one early-morning commuter told BFMTV.

The RER A line, which connects the western and eastern suburbs, by way of Paris city centre, is running at “close to normal” frequency.

The Paris metro is not affected by Monday’s strike.

RATP train conductors have blamed their industrial action on “modifications to our working conditions,” and “the scrapping of existing regulations.”