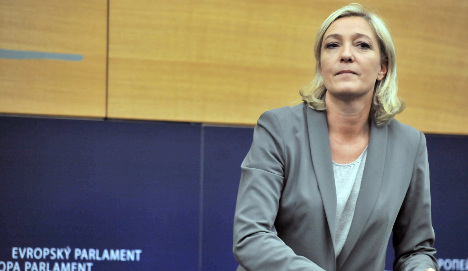 The closed-door vote by the judicial affairs committee was a simple recommendation to parliament, which will make a definitive decision on June 11th, according to spokesman Jaume Duch, confirming a report by the BBC.

A source close to the matter said the committee vote was "very unfavourable" toward Le Pen.

French authorities asked the European Parliament in November to lift Le Pen's immunity as a lawmaker so that she can be prosecuted for remarks made in a speech to her FN party supporters in December 2010.

In the speech Le Pen denounced the holding of Muslim prayers in the streets of France — where a dearth of mosques has forced many to pray outside — saying: "For those who like to talk about World War II, to talk about occupation, we could talk about, for once, the occupation of our territory.

Prosecutors in Lyon, where the speech took place, opened an investigation into the remarks for "inciting racial hatred" in January 2011 following a complaint from an anti-racism group.

Florian Philippot, FN vice president, told AFP that he would wait for the full parliament's vote, adding that it would be unheard of if Le Pen lost her immunity "for having spoken the truth about the (Muslim) prayers in the streets which still take place…. The French do not like when people hide the truth from them."

Le Pen took over the Front National from her father, party founder Jean-Marie Le Pen, who has several convictions for racism and anti-Semitism.