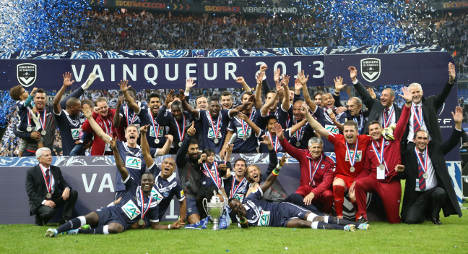 That result ensured Bordeaux will qualify for the Europa League next season.

Cheick Diabate was the hero, netting the 89th minute winner having earlier opened the scoring and missed a penalty at 1-0.

Bordeaux coach Francis Gillet said this victory proved it had not been a bad season despite their disappointing seventh-placed finish in Ligue 1.

"Our season has not been bad. Not much has been said about our 12 matches in Europe," he pointed out.

"We were seventh and I think that's our (rightful) place, with five teams who are better than us, plus Nice who got in there. We lost some players in January and I think we've done well given our squad. I'd take the same result next season."

In an entertaining game Evian twice pegged back their more illustrious opponents before Diabate's strike at the death finally extinguished their spirited resistance.

Given Evian were playing in their first ever Cup final and their most notable trophy success was a second division title in 2011, they were understandably the rank outsiders in this affair.

It was only four years ago that Bordeaux were last French champions and although they had not won the French Cup for a long time, they had won the League Cup three times in the last 11 years.

Evian coach Pascal Dupraz admitted the better side had won.

"Their victory was logical, we struggled defensively," he said.

"We had the chance to draw level but we didn't create many chances. We came back but a final mistake condemned us."

In Diabate Bordeaux had a tall, gangly forward who caused Evian problems throughout the evening.

He managed to escape beyond the backline on 39 minutes to latch onto Mariano's punt forward from right-back.

The Malian drew goalkeeper Bertrand Laquait into committing himself before rounding him and slotting past a defender on the line.

Diabate then won a penalty when Milos Ninkovic was adjudged to have pulled him back.

But Laquait this time got the better of Diabate, plunging to his left to keep out the spot-kick with a fine one-handed save.

Not long later, Evian went up the other end and Daniel Wass teed up Ivory Coast forward Yannick Sagbo to beat Cedric Carrasso with a close-range finish.

Yet within minutes Bordeaux were back in front when Henri Saivet nipped in behind the Evian backline to head home Gregory Sertic's free-kick.

Back came Evian 20 minutes from time as captain Cedric Barbosa crossed from the left and Brice Dja Djedje was left all alone to tap home at the back post.

Diabate would have the final word, though, when Ivory Coast's Dja Djedje was slow pushing up for offside, leaving the big Malian striker to run onto Nicolas Maurice-Belay's flick over the top to finish past a static Laquait.