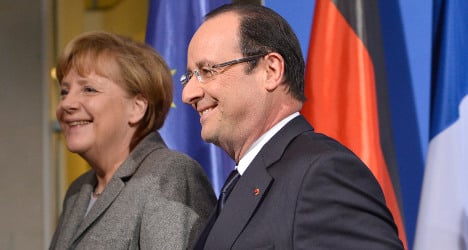 The number of registered jobseekers in France, the eurozone's second-largest economy, rose by 39,800 in April to hit a record 3.26 million, the labour ministry said on Thursday.

April was the 24th consecutive month of rising unemployment, as Socialist President Francois Hollande struggles to revive an economy that fell into recession in the first quarter of 2013.

The rise, equivalent to 1,326 new jobseekers per day, represented a 12.5 percent increase over a year ago.

When the partially employed and jobseekers in France's overseas territories are included, the figure for April rose to 5.09 million registered unemployed.

"This negative trend will continue in the coming months before we manage… to reverse the unemployment trend at the end of the year," the ministry said in a statement.

The new figures provoked a stinging attack on the French president from leader of the UMP opposition Jean-François Copé.

"Francois Hollande is responsible for the situation," said  Copé. "He is as guilty as much by his action as his inaction."

"There is nothing to anticipate any improvement in the short term and all forecasts point to a sharp increase in unemployment for the next two years," Copé said.

"The continued increase in unemployment is the result of a policy that has stifled productivity and demobilized French entrepreneurs and investors," Fillon added.

Hollande on Thursday pointed to "a lack of competitiveness" and low opportunities for youth as problem areas, speaking at a joint press conference with German Chancellor Angela Merkel.

The pair vowed a united front to push for jobs, growth and reforms, including a full-time eurozone chief, as they met Thursday for talks in Paris.

"We want (Europe) to pay more attention to jobs, notably youth jobs, to move more quickly to put in place a banking union, to have more efficient economic governance, to have more harmonius tax systems and to impliment policies for growth and competitiveness," Hollande said.

"I think we are showing once again that France and Germany are able, not to impose our views but… to bring all Europeans together on the paths that we consider best," Hollande said.

Despite the figures Hollande said he was maintaining his longstanding pledge to create more jobs in France – one of the key promises of his presidential campaign last year.

France's unemployment rate hit a 14-year high of 10.6 percent at the end of last year, and the OECD has forecast that it will rise to 10.7 percent this year and 11.1 percent next year.

On Thursday, the CFDT – one of the country's leading unions – called for everyone to mobilise to reverse the trend.

The main cause of unemployment in France remains the end of short-term contracts that have not been renewed by companies that are more and more reluctant to take on people on permanent deals.

Lay-offs only represent 2.6 percent of people registering as jobseekers.