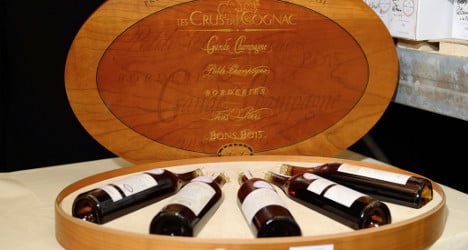 Up for sale: The French president's wine. Photo Eric Feferberg/AFP

Two bottles of 1990 Petrus wine which went for over €5,000 helped to make sure that the first night of the big Elysée wine sell-off was a full-bodied success.

The exporter was the stand-out bidder as the 1,200 bottles of the Elysée’s finest wine went under the hammer in a sale motivated by desire to raise money to fund a revamp of the palace.

“I’m very happy. The Chinese are very fond of French wine. I will keep some of the wine for us and maybe I will resell some to professional friends,” Dongxing, who had come to France especially for the sale told the media.

The sell-off which took place at the famous Drouot auction house, was targeted by anti-gay marriage opponents who shouted “We want jobs, not gay marriage” from outside the venue.

Some 250 people, some just curious onlookers, were present at the auction hall in Paris for the sale, which will run until Friday. The wine itself was not present and the public had to make do with photographs.

The oldest bottle of wine that went under the hammer was a 1936 Chateau Latour, which went for €3,500. Other bottles were sold for far more than expected with a 1961 Chateau L’Angelus, which had been predicted to sell for around €220, going for €1,100.

The conspicuous cost-cutting is in keeping with the tone of Hollande's presidency, which has been clouded by a gloomy economic backdrop.

But it has not gone down well with Michel-Jack Chasseuil, one of France's most prominent wine collectors.

Chasseuil has written to Hollande to express his regret over the decision to allow bottles "that are part of the heritage of our country to be sold off to billionaires from all over the world".

He added: "Even if they go for fantastic sums, it will be a derisory amount in terms of the national budget and when you think about what these wines represent in the eyes of the whole world."

The sale represents 10 percent of the 12,000 bottles currently held in the Elysee cellar, which has been regularly replenished since it was established in 1947. Some 150,000 euros is spent on wines in the cellar every year.

The Elysee's chief sommelier Virginie Routis told AFP that in light of the economic crisis "we can no longer allow ourselves to put bottles worth 2,000 or 3,000 euros on the table."

Each bottle included in the auction has been given a special additional label certifying that they came from the "Palais de l'Elysee" with the date of the sale, which will conclude on Friday.