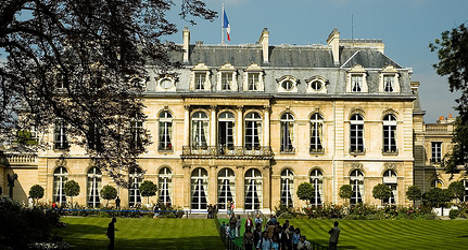 The Elysée Palace in Paris is having to sell its store of wine to fund a makeover. Photo: Thomas Faivre-Duboz

A selection of wines from the French presidential cellar are set to be auctioned off in Paris on Thursday, with 1,200 bottles on offer, according  to auctioneers Drouot.

The Elysee Palace's cellar is selling the wines in order to raise funds for a refurbishment, it said.

All those on offer, largely Burgundy and Bordeaux, but also including wines from the Loire and Alsace, have been served at the table of the French president at one time or another.

The bottles, due to be auctioned on Thursday and Friday, will be replaced through the purchase of other less pricey wines, the auction house added.

This is not the French government's only belt-tightening exercise in recent weeks, as it continues to struggle through the economic crisis and reduce public deficit.

Earlier this month it was announced that the state planned to sell off its luxury Manhattan duplex apartment, on the 12th and 13th floors of 740 Park Avenue – known as ‘The World’s Richest Apartment Building.'

The lavish apartment could go on the market for $35-40 million (€27-31 million), according to a real estate agent consulted by US-based online magazine French Morning.

And at the beginning of May, the French government was told by spending watchdog the Cour des Comptes that it would have to cut the size of the Republican Guard, the elite unit that provides the pomp and ceremony on state occasions.

The guard, which includes the last cavalry unit of the French army, has 2,859 civilian and military staff and costs €280 million a year to run.