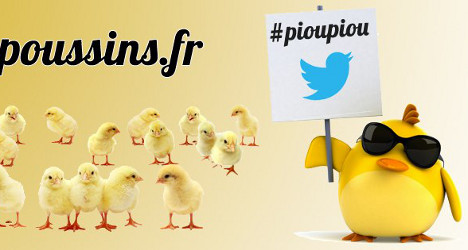 First it was a group of entrepreneurs called “The Pigeons” who got in a flap over France's Socialist government’s plan to tax the sale of businesses.

Now it's the turn of a group called “The Chicks” who have set up an online movement to fight the proposed reforms to France’s much heralded auto-entrepreneur (AE) system for the self employed.

The system has, in particular, been a saving grace for thousands of expats trying to get a foothold in France.

The movement has been launched online at the website www.defensepoussins.fr, where visitors are asked to sign a petition in support of the battle against plans by the government to limit the amount of time someone can hold the “auto-entrepreneur” status.

"The Chicks" describe themselves as a “collective of auto-entrepreneurs and citizens, non-partisans and independents from all unions”.

“We cannot and we must not accept the denial of social democracy that would lead to the destruction of our businesses, jobs and the growth of entrepreneurship in France,” reads a statement on the website.

Since 2009, around one million people are believed to have signed up to the auto-entrepreneur status that was launched by former president Nicolas Sarkozy.

It offers the self-employed an easy way to set up their own business and allows them to pay social charges as they earn rather than upfront.

But the new Socialist government wants to introduce changes and crack down on those abusing a system that was originally designed to help those who wanted to work more and earn a second income.

Companies often prefer to commission auto-entrepreneurs over regular established companies, because they will incur less costs.

Trades Minister Sylvia Pinel wants to introduce limits on the length of time someone can work as an auto-entrepreneur if they are using it as their chief source of income.

After that time, they would have to change status and set up a more established company. Those using it as secondary source of income are not expected to have a limit imposed on them.

The proposals are set to come into law in September if they pass through parliament.

This is despite a report commissioned by the government that called for ministers to maintain the simplicity of the AE scheme.

According to “The Chicks” their movement is rapidly gaining public support. They say that on Tuesday alone 6,000 people signed the petition against the changes.

They have also been given backing from several trade unions that represent auto-entrepreneurs.

One of the leaders of those unions, François Hurel, who is the president of the Union of Auto-entrepreneurs told Europe1 radio the reforms would simply create more problems than they would solve.

“The aim of the minister is to create a separation between those whose AE status is their principle title and those who use it only as a secondary income. But it will be impossible to differentiate.

“A job seeker, a student, someone on welfare benefits – into what category will they fall?”