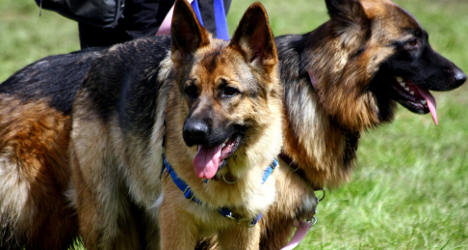 A resident of Lunel, southern France is alleged to have named his two German shepherds 'Adolf' and 'Blondi' and ordered them to 'Get the Arabs!' before attacking a neighbour. File photo: Garry Knight

The resident of Lunel, in the Hérault department of southern France, was convicted of setting his dogs – one of them named Adolf – on a neighbour of North African origins, who is a soldier in the French army.

Lauren Dauguet, lawyer for the victim, recounted the facts to regional daily Midi Libre on Tuesday.

“My client was helping his father do some moving [in the apartment block] when he heard a door opening and someone shouting ‘Get the Arabs! Get the Arabs!” said Dauguet.

“Then one of the German shepherds bit the young man…on the calf,” she added.

The defendant, aged in his forties, denied naming his dogs ‘Adolf’ and ‘Blondi’ (the name of Hitler’s own dog), as well as making any sort of racist statement directed towards the young man and his father.

The dog-owner even denied that the victim was bitten in the first place, claiming he kept a tight hold on his two German shepherds at all times – something the court rejected out of hand.

Dauguet, however, was in no doubt that the dog attack was ethnically motivated.

“My client’s dignity was attacked. He set those dogs on him as if he were game, just because he is of North African origins,” said Dauguet.

“He was born in [nearby] Sète. He is a soldier, and he represents the [French] nation that is so precious to the defendant,” she added.

The owner of the dogs was held responsible for the attack and sentenced to a month in prison.

Furthermore, the court confiscated his two German shepherds and handed him a ten-year ban from owning any dogs.

The defendant announced he would appeal the court’s decision.