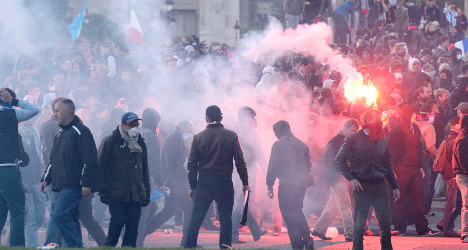 Will we continue to see mass street protests against gay marriage in France? Photo Eric Feferberg/AFP

Sunday’s mass rally in Paris against gay marriage appears to have marked the end of the recent large-scale street protests in France, as the leaders of the movement turn their backs on the campaign they have spearheaded for months.

After the latest rally ended in violence as a hail of bottles and bricks rained down on France’s police force and journalists were attacked in the street, Frigide Barjot, the comic who has led the 'Manif pour Tous' (demo for all) campaign, walked away, along with her right hand man Xavier Bongibault.

Speaking to The Local this week, Bongibault said they would continue to fight against gay marriage but under a new banner “l’Avenir pour Tous” (A future for all), which plans to bring together like-minded people to share their ideas.

Bongibaut admitted he and Barjot had lost control of the Manif pour Tous as radicals from more extreme groups like Printemps Français (French Spring) took the helm.

“With the radicalization of the 'Manif Pour Tous' movement it became intolerant, we lost control of it,” Bongibault said.

“They just want to break everything, but that’s not how you bring about change,” he said.

Bongibault, who is gay himself, said there will be no more mass street protests and 'L’Avenir pour Tous' will direct its energy towards putting pressure on France’s elected politicians to overturn the gay marriage bill as well as fighting any move towards surrogacy or medically assisted procreation for gay couples.

“We still have the aim of overturning the law and we believe it is still possible.”

"We will continue the fight all over France!"

But even without Barjot and her right-hand man, the 'Manif Pour Tous' leaders have vowed to carry on the fight against gay marriage on the streets of the country.

On Sunday, Ludovine de la Rochère, president of the movement, called on the French to continue their resistance.

"We will continue the fight all over France!" she announced to thousands of protesters at the Esplanade des Invalides in Paris. "This huge tidal wave will not stop until the law is repealed."

One of the more radical groups that has come to the fore in recent weeks at the expense of Barjot, is Printemps Français (French Spring). Its leaders have also vowed to carry on the fight.

“It’s a new start [for the movment],” said Beatrice Bourges, spokeswoman for Printemps Français. “We are heading for a reconstruction of the political landscape between two blocs: one which values the service of man and another which holds consumerist, individualistic and libertarian values.

Bourges is not in favour of the creation of a political party but she insists there will be further action in the near future.

Nevertheless, despite the rhetoric and calls to arms, with France set to celebrate its first gay marriage as soon as Wednesday in the Riviera city of Montpellier, known as the Gallic San Francisco, the battle appears to be over.

Some political experts believe the mainstream anti-gay marriage movement will soon be a thing of the past even if more extreme right-wing groups led by "nutters" continue to protest against the Socialist government.

Political expert Jean-Yves Camus, from France’s Institute of International Relations and Strategy (IRIS), told The Local it was time for opponents to lay their down their arms and accept defeat.

“It’s totally foolish to continue this movement,” Camus said. “We are in a democracy and the law has been passed and the Constitutional Council ruled that the law entirely conformed to France’s constitution.

“It is not possible for the right and the extreme right to continue to mobilize like this. Only the smaller groups will continue to demonstrate against the left,” Camus said.

“These extreme groups are made up of totally crazy people, they are totally nuts. It’s possible there will be more violence, as we have seen in recent weeks, but it will die slowly.”

'France as divided as 200 hundred years ago'

Camus believes France’s opposition UMP party, which has helped mobilize the mass street protests in recent weeks, may regret taking such a firm lead in the campaign to undermine the Socialist Party’s landmark social reform.

“The demonstrations that the UMP leaders took part in nearly always ended in violence,” Camus said.

“People will see images of demonstrators throwing stones at police and associate this with the UMP.”

Despite predicting a return to calm over the coming months, Camus said France as a country was just as split now as it was at the time of the French Revolution.

"We are a divided country. We have one bloc on the left or centre-left and another that is still very traditional and conservative. This has been the case for over two centuries and it's not over," he said.