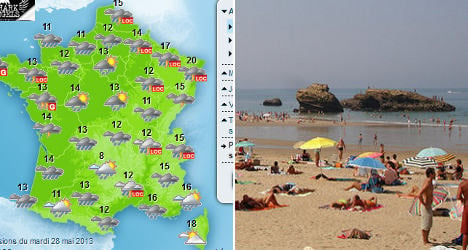 Will we see the sun in France this summer? Photo: Meteo France.

Weather forecasters in France right now are becoming as loathed as bankers and tax inspectors.

That’s mainly because they have had the temerity to predict all the wash-outs, storms and unseasonal low temperatures that have hit France recently.

After a long, cold winter and a spring that saw temperatures in some parts of the country up to six degrees lower than average for this time of year, the French are starting to question whether it will be even worth booking their annual holiday at the beach this summer.

An article on French weather site Le Chaine Meteo this week suggested summer 2013 could be as cold as the fabled 1816 summer, which also followed a cold winter.

In a separate piece more solid predictions for the summer La Chaine Meteo predicted there is a 70 percent chance that we will have a "cold summer and only an 8.5 percent possibility of a hot one.

However Jean-Pierre Ceron a climatologist from Meteo France told The Local that all hope is not lost and that we should not read too much into the failed French spring.

“Just because winter has been cold and spring has been wet we should not expect summer to follow suit,” Ceron said.

“Studies have been done that showed there’s no significant relationship between a cold spring and cold summer.

The conditions over the oceanic basins of the Pacific, Atlantic and Indian oceans makes it difficult for forecasters to make long term predictions about whether the Riviera will indeed be baked in sun this year or whether the school holidays will be a wash out in Brittany, Ceron explained.

“The simple fact is that it is very difficult to make seasonal predictions this year, so we just do not know what the summer will bring,” Ceron says.

Although the difficulty in predicting the long term forecast this summer allows us to keep our hopes up somewhat, Ceron says we can forget about enjoying any heat waves in June.

“We cannot be optimistic about the monthly forecasts. Temperatures should remain lower than normal for this time of year, but if we can have a normal July and a normal August then in the end it won’t be a bad summer,” he said.

“Just because the spring has been wet and the start of summer cold, it does not mean we cannot expect some heat waves in August.

“Last year we also had a wet spring but in August we saw the sun come out,” Ceron argued.

It will not just be school kids and families keeping their fingers crossed they will see some sun this summer. France’s tourist industry, which is already under pressure because of the financial squeeze could face a miserable few month if the clouds do not part.

"The industry is believed to have suffered losses of around 10 percent," Didier Arine director of agency Protourisme told French daily Le Parisien.

"Generally we cannot make up for the losses and if the horrible weather continues there is a risk the French will head abroad for heir summer holidays," Arino continued.