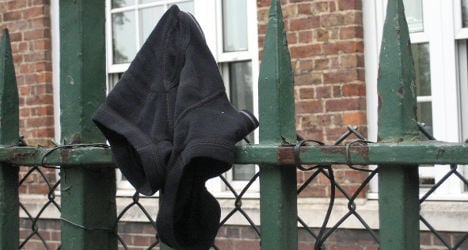 Evidence abandoned at the scene of the crime? A drunk Frenchman wore underpants on his face during a failed bank stick-up. File photo: Lettuce/Flickr

At 10am last Friday, Daniel Anfray, 56, walked into a bank in Mortain, Normandy, with the intention of robbing the establishment and taking whatever cash he could get.

Despite it being breakfast-time, Anfray had evidently given himself some dutch courage in readiness for the heist..

Whether to shock staff at the bank, or to hide his identity from surveillance cameras, the pièce de la résistance of Anfray’s scheme was to wear a pair of men’s underpants over his face, according to local French daily La Manche Libre.

Despite this attempted subterfuge, Anfray was immediately recognized by a member of the bank’s staff.

Apparently well-used to his repeated shenanigans, the female teller calmly persuaded Anfray to drop the Opinel pocket knife he had been brandishing, and then called the police.

When tested, the would-be bank robber was found to have 2 mg of alcohol in his blood stream.

Appearing in court on Monday, Anfray, who had only just been released from prison for driving while intoxicated, immediately admitted to the badly-conceived stick-up.

He also confessed to stealing two bicycles on the previous two days, saying “I was completely lost when I got out of prison. I only wanted to go into town, but it got out of hand.”

For his part, Anfray’s lawyer presented to the court an image of a sad and lonely man. “My client needs someone to hold his hand,” he said.

“And prison needs to play its part by reintegrating him into society,” he added.

The court on Monday ordered that Anfray serve an eight-month prison sentence for his pocket knife and underpants antics, though four months were suspended.

Furthermore, Anfray must undergo alcohol withdrawal treatment and psychiatric care, and is forbidden from carrying a weapon or frequenting any establishment that sells alcohol.