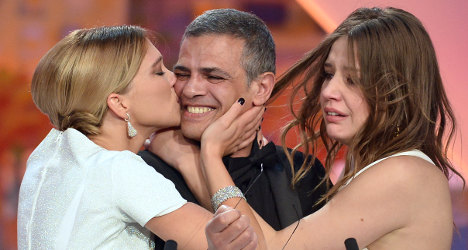 In an unusual step, Spielberg awarded the prize to Kechiche as well as the film's two stars, Adele Exarchopoulos and Lea Seydoux, who joined him on stage to calls of "bravo" from the ceremony's audience.

Tunis-born Kechiche, 52, dedicated the prize from the world's top cinema showcase to the youth of France, and the revolutionaries of the Arab Spring.

"They also have this aspiration to live free, to express themselves freely and to love in full freedom," he said, adding later that he hoped the film would also be distributed in socially conservative Tunisia.

Spielberg said the international jury including fellow Oscar winners Ang Lee, Nicole Kidman and Christoph Waltz had had no qualms about the explicit sex on screen, praising the film team's "courage", and predicted a wide art-house run.

"For me, the film is a great love story and the fact that it is a great love story made all of us feel like we were privileged, not embarrassed, to be flies on the wall — privileged to have been invited to see this story of deep love and deep heartbreak evolve from the beginning, in a wonderful way where time stood still," he told reporters.

"We were absolutely spellbound by the brilliance of the performances of those amazing young actresses and all the cast, and especially by the way the director observed his players, the way he just let the characters breathe. We just all found it was a profound love story."

The prize came on the day of a major demonstration in Paris against a new law making France the 14th country worldwide to legalise same-sex marriage.

Asked whether the film had a political message, the 19-year-old Exarchopoulos said it was first and foremost about love.

"If it becomes an ode to tolerance, that would be even more gratifying," she added.

The Coens' film "Barton Fink" won Cannes in 1991 and the brothers last entered the running in 2007 with "No Country for Old Men".

Bejo, 36, made her name in the hit French silent movie "The Artist".

One of the stars of Hollywood's 1970s golden age, 76-year-old Bruce Dern, took the best actor prize for his performance as an alcoholic father in Alexander Payne's recession-era road movie "Nebraska".

China's Jia Zhangke won the best screenplay award for "A Touch of Sin", which offered a shocking look at rampant corruption and exploitation in his country.

And an emotional Japanese drama about young boys switched at birth, Hirokazu Koreeda's "Like Father, Like Son", bagged the third-place jury prize.

Adapted from a graphic novel of the same name, "Blue" emerged as an instant favourite during the 12-day festival on France's Cote d'Azur.

"You realise the film has won your heart without ever really asking for it, and you leave the cinema utterly lovesick," said London's Daily Telegraph critic Robbie Collin.

But in a dissenting critique, New York Times critic Manohla Dargis questioned the director's motives in including lengthy scenes of hardcore sex.

"The movie feels far more about Mr Kechiche's desires than anything else," she said.

Kechiche won the Cesar, the French Oscar, for the 2003 drama "Games of Love and Chance" set among teenagers in the housing projects on Paris' outskirts, and again for 2007's "The Secret of the Grain", also released under the English title "Couscous".

In a year in which gay themes resonated on and off screen, Steven Soderbergh's made-for-TV biopic of celebrity pianist Liberace and his long-time lover, "Behind the Candelabra", also drew praise at Cannes for its stars Michael Douglas and Matt Damon.