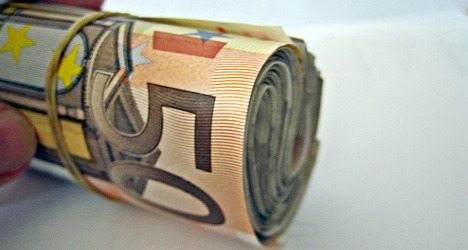 A plan to cut fat cat pay in the private sector has been ditched. Photo: Images of Money/Flickr

The government’s controversial proposal to cap fat cat salaries in the private sector was supposed to be on the table “before summer” and was described last July by France’s Finance Minister Pierre Moscovici as "a law to regulate or prohibit certain practices that seem excessive”.

But the same Moscovici revealed on Friday that the government has now decided to ditch a bill, which would have mirrored measures already taken to limit the pay packets of the bosses of state-run firms.

“There will be no specific bill on corporate governance,” said Moscovici in an interview with Les Echos. The minister said he now prefers to use "dialogue" rather than the law to achieve the government’s aim of limiting salaries.

“We prefer to focus on self-regulation. But be warned, if there are measures taken that are not up to standard then we will reserve the right to legislate,” Moscovici added.

The move was both welcomed and ridiculed by France's opposition UMP party.

The deputy Henri Guaino, said it showed the Socialists had "once again lied."

"Even if salaries are often excessive, thinking we will solve this problem by a specific law is, in my opinion, absurd and the government has realized this," said the former adviser to Nicolas Sarkozy.

According to RTL, France’s highest paid executive is Maurice Levy, who is the boss of Publicis. Levy earns is reportedly on a pay packet of €4.8 million a year.

He is followed by Jean-Paul Agon who pulls in a reported €3.885 million and in third place is LVMH chief Bernard Arnault who is reportedly on around €3.79 million.

It is the second time the Socialist government has backed down on a measure aimed at targeting the county’s most wealthy after it scrapped its flagship plan to introduce a 75 percent tax bracket on top earners earlier this year. The government however insists it will go ahead with reformed plans to levy the 75 percent tax on salaries through the companies instead.

The minister announced the recent backpedal after holding a meeting with two powerful business unions Medef and the French Association of Private Companies (AFEP) who both say they are committed to building a code of “corporate governance”.

Moscovici, who insisted companies “are at the heart of  our economic policy” is promoting a new initiative titled “Say on Pay” which would allow shareholders to vote on executive salaries.

France has already taken steps to limit executive pay in state firms to €450,000 and has introduced a scale which bars the boss of a publicly owned firm from earning 20 times more than the lowest paid worker.

Moscovici's u-turn is unlikely to please the left wing of the Socialist party who are already peeved the 75 percent tax rate on those earning above a million francs has not made it into law, as promised by President François Hollande in his election manifesto.

The government now wants to levy the tax from companies rather than individuals but in a recent press conference Hollande announced that the tax change will be submitted to parliament in the 2014 budget.