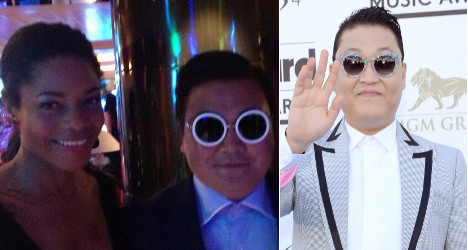 Is it Psy or is it Denis Carre from rural France. Photo: Naomie Harris /AFP

Who is Denis Carre?

Why is Denis Carre in the news?

Firstly because he looks like the South Korean singer who swept the world onto the dance floor with the decidedly camp hit Gangnam Style and because he has been named as the man who had the nerve to pretend to be the real Psy so he could live it up with the stars on the red carpet at this year's Cannes Film Festival for two whole days.

This excerpt from the Hollywood Reporter pretty much sums his feet.

"Psy was spotted all over town, attending festival parties and events and posing for photos with festival goers and other celebrities," the Reporter said.

"But it turns out that the man was not Psy at all, but rather an imposter using his name and fame to get access to the festival."

Psy's double was dressed exactly like the genuine South Korean star, with his trademark jackets and round sunglasses. He spent a day at the top-ranked Martinez beach restaurant and partied at night at the A-listers' Carlton hotel.

In doing so he managed to trick a blogger for French daily Le Figaro's Madame magazine, who hit the keyboard to herald Psy's arrival at the festival.

The writer even mentions that the star had no fears about mixing with the fans. "He is doing nothing to avoid anyone's advances"…. it reads.

And Radio Prestige even put a video online, which has since been removed, showing the phoney Psy announce a dance competition. And he was also given a mention in the New York Times.

And not content with deceiving the ranks of the media, the fake Psy soon turned his attention to the stars of the screen.

It was not before long he was busy being snapped with none other than Miss Moneypenny aka British actress Naomie Harris.

She looked delighted in the picture she tweeted ( see above). Where as the false Psy however, remained deadpan, holding his nerve with his white-rimmed sunglasses fixed firmly in place.

Harris later realised she had been seeing double.

It looks as if we've been fooled, that wasn't the real @psy_oppa! Could anyone else tell from the picture? Or am I just going crazy!? Haha!

Soon, the fake Psy was busted. Yet despite now suffering a hail of catcalls such as imposter and gatecrasher, Carre had managed to avoid detection on the Croisette for a full two days.

Tell me more about Denis Carre

We have not heard from Mr Carre himself after his antics but he was ousted by regional French newspaper La Montagne. The paper carried an interview with Carre in which he revealed that he was being thronged by Psy fans long before he himself even knew who Psy was.

He said it began to dawn on him when he was cornered by a photo-eager mob in a Dublin nightclub last year.

"A crowd of people gathered around me, and the situation got totally out of control. We were only able to get out with the help of the bouncers. Then it happened again and again, to the point that the resemblance (with Psy) was causing problems in my private life," said Carre, who hails from the Puy-de-Dôme area of rural Auvergne..

What did the real Psy make of his impersonator?

Well, he seemed to take it well tweeting from Singapore that it "seems like there's another ME at Cannes…say Hi to him".

Psy has has more than 2.8 million followers on Twitter- that's more people than there are Parisians living on the inside of the périphérique – so the message has probably got round.