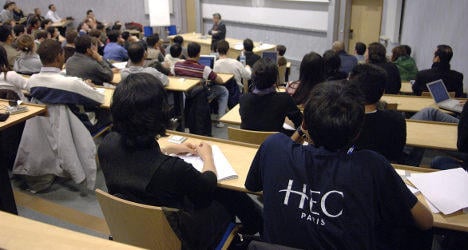 French universities appear to be having somewhat of an identity crisis right now. The government wants to be able to attract the top students and academics by teaching more courses in English, something that has been done for years at France's private institutions like the prestigious Paris business school HEC. As part of our My French Career series The Local speaks to HEC lecturer Kevyn Yong, who is originally from Singapore but has previously taught in the US, about what it's like to work as an academic in France at a crucial time for higher education.

Kevyn Yong, lectures in Organizational Behaviour at HEC. He has been at the business school since September 2008.

How did you end up in Paris?

When I finished my PhD in the US I looked for jobs around the world. I had possibilities in New York, Paris and Rotterdam, but from a professional point of view I felt that the offer from HEC in Paris was the most interesting. I had also never lived in Europe before and never lived in a country where I didn’t speak the language so I thought Paris would be the best place to do it.

How important is it to speak French if you want to work as an academic here?

I think it depends on what institution you teach at. At schools like HEC and INSEAD and the more internationally orientated universities you don’t need it but at the French state universities I  think it is more important.

What are the differences between teaching in France and the US?

One of the biggest differences is the range of nationalities that I teach here. In my MBA lectures here I will have around 150 students and among them there will be around 40 to 50 different nationalities. In the US it’s much lower. I did not see that coming and was surprised by that. The gender diversity is also much higher here with around 40 percent of people on the programme being women.

One of the reasons I came was because I was told I could teach how I wanted. The way I approach a lecture is the same as I would do in Singapore or the US.

What side of the fence are you on when it comes to the row over more English courses at French universities?

I can understand both sides of the argument. I do believe that the French universities would have a greater impact globally if they allowed more courses to be taught in English. The language of academia is English, that’s just the way it is. It’s just not because it is superior to French it’s just because everyone needed one language to communicate in.

I do recognize the worries the French have that their language will be diluted, but I don’t believe that will ever happen. It’s a big advantage to be bilingual. If you can do your research in English and speak French that is an amazing skill and a real advantage for French-speaking academics.

How have you, a foreign academic, been received by French colleagues?

There’s been two distinct reactions, one supportive and the other resistant, which  reflects the differences of opinion over the proposed changes to the law on English. There are those who see beyond my nationality and language and look at my skill set. There are others, who frankly speaking are simply resistant to change and it always comes down to the fact that I am not French. It has nothing to do with whether I can teach or whether I am a good researcher, it’s just because I am not French. It’s unfortunate.

What would you advise other international academics thinking of applying for jobs in France?

France has got great untapped potential for academics. Here in France there’s much less of a culture of undertaking collaborative projects between researchers and companies so there’s a lot of opportunities that would not be there in Singapore or the US for example. It’s a relatively new phenomenon here so it could be interesting. They also should not be resistant to the way things are done at their institution in France.

And  anyone coming here needs to be open-minded; it’s very important to embrace French culture.

Have you noticed a difference between French and international students?

I was warned about this and I have seen a difference, yes. The French students don’t speak up unless they are 150 percent certain they have the right answer, otherwise they will be embarrassed. Part of that has to do with their education in primary school. I have to say I am not alarmed by this because I am from Asia and it’s a similar culture there.

How have you adapted to French culture?

I knew it was a new country and a new language, so I gave myself 12 months to settle in but if the truth be told it took me a year and half. The language was not the problem. I had to get my head around the cultural differences. For example when thee staff at Ikea told me it would take 12 days for my furniture to be delivered. They could not do it in 11 to accommodate me. They are a real stickler for rules here. I thought they were unhelpful but in the end I realized they don’t do things that are not within their powers.

I used to think the French were lazy when I first came and saw everything close up in August and they all go off to the beach. But you realize they stop work to spend time with their family and there’s something to be said for that in terms of work-life balance.