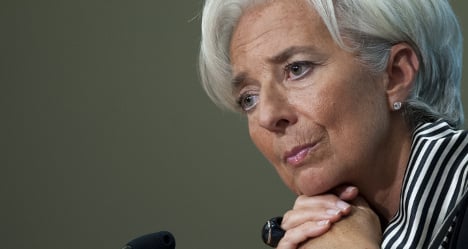 International Monetary Fund chief Christine Lagarde arrived at a Paris court Thursday for questioning over a state payout to a disgraced tycoon Bernard Tapie during her time as French finance minister.

Lagarde is appearing before the Court of Justice of the Republic (CJR), which probes cases of ministerial misconduct, to explain her 2007 handling of a row that resulted in 400 million euros being paid to Bernard Tapie.

Criminal charges against Lagarde, 57, would mark the second straight scandal for an IMF chief, after her predecessor Dominique Strauss-Kahn, also from France, resigned in disgrace over an alleged assault on a New York hotel maid.

Her court appearance comes a day after Lagarde, the first woman to run an organisation considered the pillar of the international financial system, was named as the world's seventh most powerful woman by Forbes magazine.

Known for both intellectual prowess and elegance, Lagarde smiled as she arrived at the courthouse at an upscale Paris neighbourhood, greeting the several dozen reporters outside with "It's a pleasure to see you again" before
entering the building.

Tapie is a former politician and controversial business figure who went to prison for match-fixing during his time as president of France's biggest football club, Olympique Marseille.

Prosecutors working for the CJR suspect he received favourable treatment in return for supporting Nicolas Sarkozy in the 2007 and 2012 presidential elections.

They have suggested Lagarde — who at the time was finance minister — was partly responsible for "numerous anomalies and irregularities" which could lead to charges for complicity in fraud and misappropriation of public funds.

Lagarde would not automatically be forced to resign her job as head of the International Monetary Fund if a French court decides to prosecute her in the Bernard Tapie case.

But such a ruling could weaken her as managing director of the Fund, after having led it through four difficult eurozone rescues in her 22 months in the job.

And it would mean the second IMF managing director in a row – both French – beset by legal problems, after the sex scandal that forced the resignation of her predecessor, Dominique Strauss-Kahn.

The investigation centres on her 2007 decision to ask a panel of judges to arbitrate in a dispute between Tapie and Credit Lyonnais, the collapsed, partly state-owned bank, over his 1993 sale of sports group Adidas.

The payment Tapie received enabled him to clear his huge debts and tax liabilities and, according to media reports, left him with 20-40 million euros which he has used to relaunch his business career.

"Lagarde will for the first time have the opportunity to provide (the CJR) with explanations and clarifications that exempt her from any criminal responsibility," Yves Repiquet, Lagarde's lawyer, said of the court appearance.

The IMF has stood by Lagarde, who replaced her compatriot Dominique Strauss-Kahn as head of the organisation in 2011.

"There's nothing new under the sun," she said last month in Washington.

"Ever since 2011 I had known very well that I will be heard by the investigative commission of the Cour de Justice."

She has said the arbitration was necessary to put an end to a long-winded and costly dispute, and has always denied having acted under direct orders from Sarkozy.

A charismatic populist, Tapie was a minister under Socialist president Francois Mitterrand but he backed right-winger Sarkozy in the 2007 and 2012
elections.

He recently purchased a newspaper group in the south of France and there has been speculation about him re-entering politics as a candidate for mayor of Marseille in 2014.

Lagarde, meanwhile, has had a glittering career in law and politics.

She is the first woman to head the IMF and was also France's first female finance minister from 2007 to 2011 after rising to the executive board of US legal giant Baker & McKenzie.