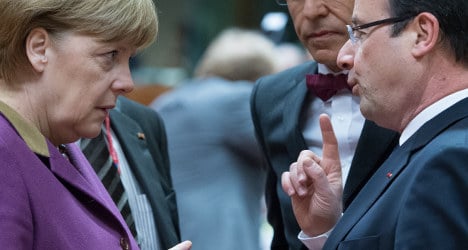 The French Socialist president will give the keynote address at the anniversary celebrations of his centre-left allies, who are battling poor poll ratings as they try to unseat Merkel in September 22 elections.

Germany's oldest political party has invited nearly 50 current and former heads of state and government as it celebrates its turbulent history, which saw it advance workers rights and suffer persecution by the Nazis.

It will also look to the future as it seeks to relaunch itself at the event in Leipzig, the eastern city where the party's precursor, the General German Workers Association, was founded in 1863.

"I am convinced that this will give us momentum for the elections," said Social Democratic Party (SPD) chief Sigmar Gabriel, who called the celebration "the largest international political event in Germany this year".

A worldwide group of about 70 left-of-centre parties — including Britain's Labour Party, the African National Congress and the US Democrats — on Wednesday, the eve of the event, founded a "Progressive Alliance".

Intended as an alternative to the Socialist International coalition, founded in Paris in 1889, its stated goal is to make the 21 century "a century
of democratic, social and environmental progress".

Hollande will give a speech around 1000 GMT to his centre-left political allies who are trailing behind Merkel's centre-right coalition, just as Hollande has slipped in popularity after a little over a year in office.

Elysee Palace officials say Hollande is at the "non-partisan celebration" with the blessing of Merkel, and that he does not intend to use it to rally support for Merkel's election rival Peer Steinbrueck.

Latest German polls give Merkel's conservatives a lead of 41 percent against 24 percent for the Social Democrats, whose top candidate Steinbrueck has suffered through a series of campaign missteps.

Merkel – often voted Germany's most popular politician and regarded as Europe's most powerful leader amid the financial crisis – will not speak at the anniversary, considered a historical event which she attends as national leader.

Germany's largely ceremonial President Joachim Gauck, a former Christian pastor and civil rights activist in what was the communist East Germany, will address the ceremony on behalf of the government.

Merkel is set to leave early for a meeting with Dutch Prime Minister Mark Rutte.

Tensions have simmered in recent months between the Hollande and Merkel governments, despite protestations on behalf of the two leaders that their friendly relationship is Europe's "best-kept secret".

While members of Merkel's coalition have painted recession-hit France as slow to reform, French Socialists have accused Merkel of selfishly driving fiscal belt-tightening that heaps pain on the continent's people.

On Wednesday, however, Hollande said France and Germany were working on a joint economic initiative to put to their EU partners at a summit in June that is scheduled to focus on ways of boosting growth and jobs.

The SPD, which is campaigning in alliance with the Greens, has meanwhile presented its most leftist policy programme in years, pushing for less austerity in Europe, a minimum wage at home and higher taxes for the rich.

The SPD has alienated many core supporters with tough labour reforms several years ago, dubbed Agenda 2010, that are credited with keeping the economy competitive but also blamed for creating a new army of "working poor".

While Merkel has presided mostly over a humming economy, partially as a result of the reforms, she has also made many former centre-left policies her own, from phasing out nuclear power to scrapping military conscription.