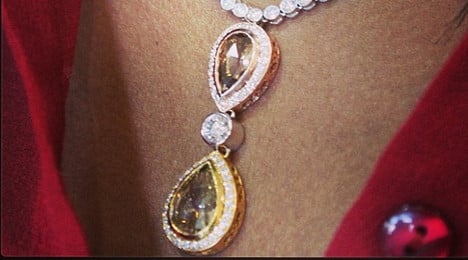 Wealthy women in Paris are being kidnapped and robbed for their jewellery. Photo: InterGem Jewellery

Two women in a matter of weeks have suffered the terrifying ordeal of being abducted from a Paris street, forced  to hand over their high-value jewellery and then dumped by the side of the road in another part of the French capital.

The modus operandi of the two robberies and the fact both women have been kidnapped from wealthy parts of Paris has convinced French police that the same gang of robbers is behind both attacks, sources told French media.

The latest robbery occurred on Sunday night when a 57-year-old Saudi national was abducted just after midnight from Avenue Foch in the 8th arrondissement of the French capital moments after being driven back to her apartment by her chauffeur.

Three masked men confronted her as she was about to enter the building, sprayed tear gas into her face and dragged her into their BMW car, according to French newspaper Le Parisien.

According to the French newspaper’s police sources she was forced to hand over valuables including jewellery worth more than €150,000.

The victim was later found shocked but unharmed by the side of the A1 motorway to the north of Paris.

“The woman was very traumatized by the kidnapping. She was not hurt and the police are actively hunting those responsible,” a police source told Le Parisien.

The attack came just weeks after an 89-year-old woman was kidnapped by robbers near her home in the Invalides area of Paris and forced to hand over jewellery worth an estimated €230,000.

Just as in the recent robbery the thieves were lying in wait and pounced as the elderly victim, named Anna, returned to her apartment block after dining in a nearby restaurant.

She was dragged into a car, forced to hand over her jewellery and then dumped on the outskirts of the city.

“The method used in both cases is identical. These kidnappings are practically impossible to prevent and the attackers appear to have identified their victims beforehand. These were not random robberies,” a police source told the Le Parisien.