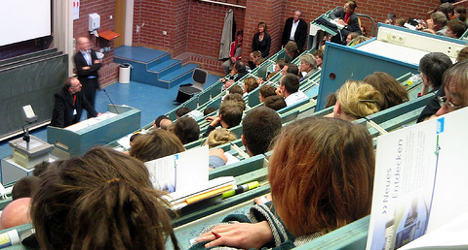 Will more lectures at French universities be given in English in future? Photo: Till Westemeyer

It has been billed as a battle between Moliere and Shakespeare and, just as the gay marriage row has been put to bed, it promises once again to see French deputies lock horns in fierce debate in France’s lower house on Wednesday.

We are talking, of course, about the proposal by France’s Minister for Higher Education, Geneviève Fioraso to change a landmark French law to allow more degree courses to be taught in English and other languages at French universities.

Fioraso wants to change the famous 1994 Toubon law – which states that French must be the language of all teaching – a move that would enable universities to attract more students from across the globe.

With the subject of the English language always a sensitive issue in a country keen to protect its own language from the “Anglo invasion” the plan has been met by widespread opposition from authors, to journalists, to opposition deputies and even politicians from within her own party.

But as the government faces yet another key moment, Fioraso railed against those opposing the bill, accusing them of “hypocrisy” for ignoring the fact that for years courses have been taught in English at France’s elite Grandes Ecoles.

The minister denounced “a great hypocrisy, which has seen the Grandes Ecoles breaking the Toubon law over the last 15 years, except no one said anything.

"I see that many people who criticise this law studied at the Grandes Ecoles, that have for a long time, taught courses in English,” Fioraso said.

“They speak a high level of English and their children are in the same situation. I find it misguided to deny students the chance to benefit, if they so wish, from courses in English.”

Fioraso insists the change in law is needed to end the “inequality” and to better regulate a situation that already exists.

"French will be vandalized"

But summing up the feeling of the opposition towards the plan journalist Bernard Pivot, a leading figure in French cultural circles, said it could sound the death knell for what locals quaintly call "the language of Moliere."

"If we allow English to be introduced into our universities and for teaching science and the modern world, French will be vandalized and become poorer," he said.

Although many politicians and writers are against her plan, Fioraso insists the academics are on her side.

“This is a project that is demanded by institutions; let’s trust the institutions themselves,” she said.

The issue dominated the French press on Wednesday and has provoked a certain amount of soul-searching in a country often accused of having a fear of globalization.

“Do we need more English [courses] in our universities?” read the headline on Europe1 radio.

The French government believes the change in law is needed to allow French institutions to be able to compete with universities across the globe in the battle to attract the world’s brightest students through their doors.

Fioraso aims to increase the number of foreign students at French universities from the current level of 12 percent of the total to 15 percent by 2020. She insists however that all foreign students will be forced to take French language courses as part of their degree.

Not everyone in education is on her side and some teaching unions have even threatened to go on strike.

"It is the cultural heritage which is at stake," said Claudine Kahane, a senior official of Snesup-FSU, one of the main unions in the education sector.