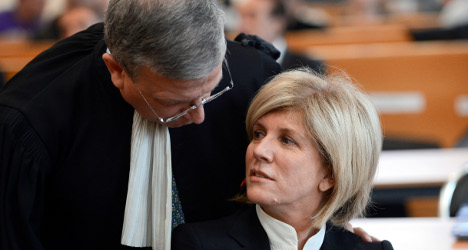 Sylvie Andrieux, the Socialist Party deputy for the Bouches-du-Rhône area in the south of France was jailed for one year by a French court on Wednesday and fined €100,000.

The deputy was also handed a further two-year suspended prison sentence and barred from holding public office for five years.

The news is a fresh blow to President François Hollande whose government is still reeling from the tax fraud scandal involving former budget minister Jerome Cahuzac.

Andrieux’s conviction comes after an inquiry  into the misappropriation of €740,000 in public grants in the region.

The official inquiry followed an investigation by the anti-money laundering department in France’s finance ministry, which had been looking into suspicious flows of money between bank accounts belonging to several construction companies based in and around Marseille, between 2005 and 2007.

Andrieux was found by the court to have knowingly presented applications for grants for made-up companies, simply to be able to financially reward people who had helped to get her elected.

Andrieux was elected as deputy for a fourth term in the parliamentary elections of June last year, despite being under official investigation by police at the time.

Right up until her trial, in which she appeared alongside 21 other defendants, Andrieux pleaded her innocence.

“I hope at the end of this to be calm and that my honour will be finally cleared of all the accusations that have been thrown at me over the years,” she told French daily Le Parisien in February.

In the aftermath of the Cahuzac tax fraud scandal Hollande presented a raft of measures to the French parliament aimed at cracking down on corruption and fraud.

Among the proposals will be a requirement for France's 1,200 elected politicians to declare all their assets and interests and they will be barred from holding certain positions, such as advisory roles or central posts in public companies. Failure to declare could result in a prison sentence of up to five years.

A special unit will be set up to investigate tax fraud and any politician convicted of the crime will be barred from holding public office.