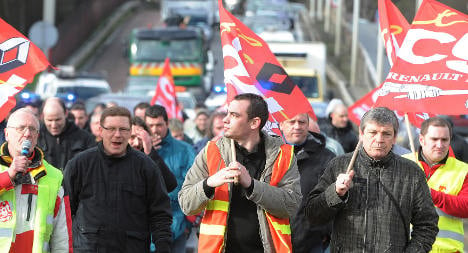 A new French online game is allowing players to step into the shoes of an ArcelorMittal worker by fighting police and a robot version of Indian steel magnate Lakshmi Mittal to keep a factory open.

Players throw barrels and beams at police in the "Kill Mittal" game inspired by the long-lasting – and ultimately unsuccessful – struggle in France's north-eastern town of Florange to stop the closure of steel blast furnaces owned by Mittal.

"This game is not an incitement to violence or to beat up the big bosses. I purposefully chose the cartoon style and you never see blood," said Alexandre Grilletta, founder of the video game available at www.killmittal.com.

"The story of the Florange workers was just a good topic, with heroes and baddies, the ingredients to make a good video game," he told AFP.

The closure of the ArcelorMittal-owned steel plant in Florange has been the subject of much grief in France, where it has become a symbol for the gradual dismantlement of the country's industrial sector.

When French President Francois Hollande came to power last year, he pledged to preserve jobs at Florange, but he eventually buckled under the costs of reviving it, agreeing to mothball the loss-making furnaces through a deal that would prevent lay-offs.

Angry unions subsequently placed a gravestone near Florange marked "Betrayal", but a local mayor from Hollande's Socialist party later had it removed, saying the true culprit was Mittal.

The Indian billionaire himself appears in the game as a robot and players have to rally other workers to help them rebel against security forces by fighting with weapons at their disposal such as big beams or cars.

"2030, Mittal has taken hold of, and closed, the majority of steel factories worldwide, tossing out thousands of steelworkers," the game explains
in its introduction.

"For these men tired of unfulfilled promises and repeated closures, when all mediation has failed, there is just one solution: Kill Mittal."

Once the Mittal robot is defeated, however, the game reminds the player that this was only one struggle and that Mittal will quickly be replaced by someone else.