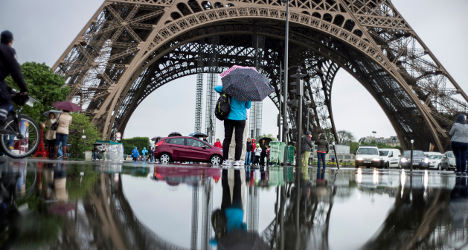 Tourists walk under the rain at the feet of the Eiffel Tower on May 16, 2013 in Paris. Photo: Fred Dufour/AFP

After the long, cold winter which saw much of the country hit by snow the French are crying out for some sun, but it seems they will have to wait a while yet.

After staying away for much of winter and spring the sun is still not ready to make a regular appearance in France.

According to Météo France, the national weather agency, the heavy rain that kept most people trapped in doors over last weekend’s Pentecost holiday is to continue until the end of the month, meaning that Spring 2013 is set to be one of the coldest in the last 20 years.

And even the normally sunny Mediterranean has been affected by the foul weather.

The Cannes Film Festival, is normally basked in sunshine but if you looked at images of stars taking shelter under umbrellas as this year's event, you could be forgiven for thinking it was being held in Caen, Normandy rather than Cannes on the Mediterranean.

According to Météo France, temperatures in northern France for the first half of May 2013 were two degrees below average temperatures  recorded for this time of year.

And apart from Brittany in the west of the country average temperatures have been down right across France.

The period has also been marked by heavy rainfall, which lead to severe flooding of the Seine river in the region around Troyes earlier this month.

It has rained for a up to eight consecutive days in parts of northern France and in parts of the east residents have had no less than 12 successive days of downpours.

With Météo France predicting no improvement until next Wednesday, T-shirts and shorts will have to be stored away for a while longer.

France's tourism industry has been severely impacted by the bad weather and those in the industry are just hoping things will improve by the summer holidays.

"The industry is believed to have suffered losses of around 10 percent," Didier Arine director of agency Protourisme told French daily Le Parisien.

"Generally we cannot make up for the losses and if the horrible weather continues there is a risk the French will head abroad for heir summer holidays," Arino continued.