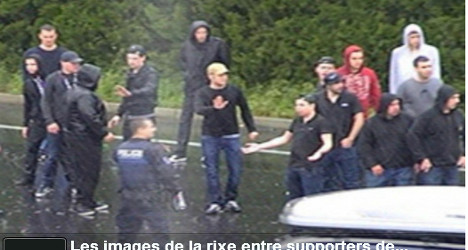 A supporter of French club Marseille has been charged for his part in a violent confrontation between rival football fans at a motorway toll plaza in the south of the France.

Hooligans from Marseille and Lyon fought running battles in front of shocked motorists on Saturday at a toll station near Bollène in the Vaucluse region of France (see video below).

The two sets of fans had met by chance when Lyon supporters, returning home after their game with Nice had been called off, found themselves pulling in to the toll plaza at the same time as a band of Marseille fans were on  their way to watch their team play St Etienne.

The fans confronted each other in a mass melee in the pouring rain as a small police presencestruggled to gain control. The violence was captured on an amateur video footage, which has since been replayed across French media sites.

In total 17 supporters were injured, two of whom were left in a serious condition. Both sets of fans have issue statements blaming their rivals for starting the violence.

The 26-year-old man Marseille fan has been charged with violence using a weapon and reoffending.

Both football clubs said they regretted the incidents.