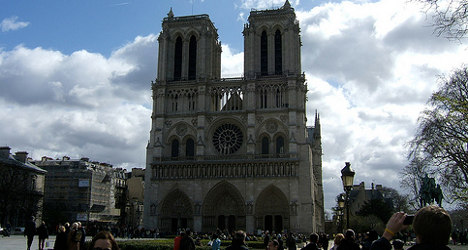 Far-right historian and gay marriage opponent Dominique Venner walked up to the altar in the famous Notre Dame Cathedral in Paris on Tuesday and took his own life by shooting himself in the head in front of shocked visitors.

Venner reportedly pulled out a gun and shot himself some time after 2pm, forcing the evacuation of the famous cathedral.

Venner, who specialized in weapons history, was the author of several history books and had close links to the far-right movement. He was once handed a prestigious award from the Academie Francaise for one of his works.

The rector of the cathedral, Monsignor Patrick Jacquin, told AFP that Venner had laid a letter on the altar right before killing himself.

"We did not know him, he was not a regular at the cathedral," Jacquin said, adding that he believed it was the first time anyone had committed suicide inside the cathedral.

There has been speculation Venner's act may have been motivated by his firm opposition to gay marriage.

The details of the suicide note are not yet known but Venner left a message, which was read out by a friend after his death on the conservative station Radio Courtoisie, and a final essay on his website.

They denounced both the recently passed law legalizing gay marriage and immigration from Africa.

"I believe it is necessary to sacrifice myself to break with the lethargy that is overwhelming us," he said in the message read out on the radio.

In the post he makes a reference to the mass protest against gay marriage which is planned for May 26th.

"Protesters will be right to shout out their impatience and anger. A deplorable law, once passed, can always be repealed," he wrote.

In another blog post Venner wrote: "New, spectacular and symbolic gestures will certainly be necessary to shake the sleepiness, jolt our anaesthetized consciousness and awaken the memory of our origins. We are entering a time when words must be backed up by deeds. "

But Venner's publisher poured cold water on the idea the suicide could be related to his opposition to gay marriage.

The leader of France's far right movement Marine Le Pen tweeted a tribute to Venner in which she referred to his suicide as a "political act".

"All our respect to Dominique Venner, whose final act, eminently political, was an attempt to wake up the French people," Le Pen said.

"I do not think we can link his suicide to this case of marriage, it goes far beyond that," Pierre-Guillaume Roux told AFP. Roux said he had only spoken to Venner on Monday evening to discuss his next book, which is set to be published in June.

Venner had also been the editor of bimonthly history magazine Nouvelle Revue d'histoire, since it was created in 2002.

He was a paratrooper during France's war in Algeria and was a member of the OAS (Secret Armed Organization), a short-lived paramilitary group that opposed Algeria's independence from France.

France's Interior Minister Manuel Valls visited Notre Dame shortly after Venner's suicide and described the incident as "the act of a desperate man".

Around 1,500 people were reportedly inside Notre Dame Cathedral when it was evacuated. The famous church is currently in the middle of a year-long celebration to commemorate the historic building's 850th anniversary. A series of events have been planned throughout the year.

The incident comes less than a week after a man walked into a primary school in Paris and shot himself in the head in front of terrified children.

The man in his fifties, with a history of family problems shot himself in the head last Thursday in front of a dozen young children in the hall of a Catholic primary school.

The incident sparked a debate about security in French schools and whether metal detectors should be placed at entrances, like in the United States or Britain.