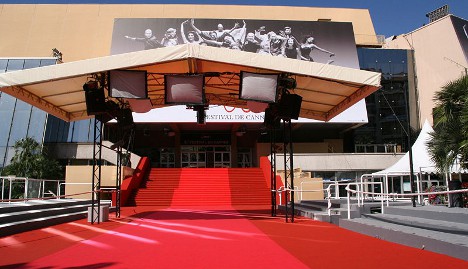 There were no casualties in the incident, and the TV channel, France's Canal +, resumed broadcasts after a break of several minutes.

The suspected assailant fired twice in the air as he approached the temporary studio, set up on the Croisette seafront for special coverage of the film festival, they said.

"He said to a woman next to him 'if I were you, I wouldn't stick around here'," said Michel Denisot, the programme's presenter.

"The police intervened. He had a hand grenade. There were no bullets in the gun and the grenade was a fake," he told viewers.

There was a brief moment of panic in the crowd around the seafront studio, but no-one was hurt.

Marcel Authier, in charge of public security in the local Alpes-Maritimes department, told AFP that the arrested individual was a 42-year-old man.

"It's someone mentally unstable who was immediately arrested," Authier said.

Police sources said the man also carried a switchblade knife and had shouted: "I'm doing this in the name of God" during his arrest.

Earlier Friday, jewellery worth $1.4 million due to be loaned to stars at the Cannes Film Festival was stolen from a local hotel in a pre-dawn heist, according to French investigators.

Swiss jewellers Chopard said, without giving a figure, that the value of the lost items was far lower. It also denied that the jewels were to be worn by actresses at the festival.

The Cannes Film Festival is ranked as the world's most prestigious movie showcase.

Security for the event is high, and was stepped up after the April 15th bomb attacks in Boston.