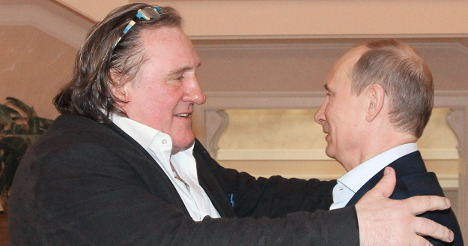 Depardieu is preparing to shoot a new film in Moscow and the Chechen capital Grozny — a city rebuilt from the ground up after nearly two decades of war — as he settles in to his new role as global ambassador of Russian culture.

The hulking actor received his new citizenship during a dinner with Putin — object of scorn from Russia's youth-driven opposition movement — in January after getting into a fight with the French authorities over a new 75-percent tax on the super-rich.

He told the Komsomolskaya Pravda daily in an interview published Saturday that he felt proud of what Putin has done in his 13 years in charge.

"I have many Russian friends — Putin, for example," said the star of films such as "Cyrano de Bergerac" and winner of a multitude of the industry's most coveted awards.

"I will say what I think about Putin: the Russian nation needs a person just like this — with a Russian temper. Putin is trying to return just a bit of dignity back to the people."

He then added: "For me, he is like (former French president) Francois Mitterrand or Pope John Paul II. I never said this to journalists before, but this is what I think."

The late pope was a staunch anti-Communist who is partially credited with helping to give strength to the pro-Western Solidarity movement in his native Poland in the 1980s.

Putin himself has called the collapse of the Soviet Union one of the great tragedies of the 20th century and is blamed by the opposition of failing to expose and condemn the worst of the atrocities committed by the dictator Joseph Stalin.

Depardieu hotly denied that he took on Russian citizenship as some public relations stunt aimed at reviving his career.

"That is just laughable," he told the popular Moscow tabloid. "I have more that 200 films. Who needs PR after that?!"

The straw-haired actor explained that he simply had to leave France because he could not live by French President Francois Hollande's policies and that he felt more comfortable with former leader Nicolas Sarkozy.

"I liked Sarkozy because everyone was against him," Depardieu said.