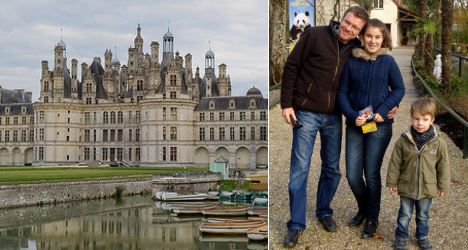 Jon Scorse, aged 38, manages the Italian restaurant Stratto in the town of Blois in the heart of the picturesque Loire Valley. He lives there with his wife and two children Sasha and Gabriel.

How did you end up in Blois?

My wife is a schoolteacher and she got posted here so we did not have much choice. We did not know anything about the place but we are pretty happy with where we ended up.

Have you integrated into French life?

Yes I think so. In this region it’s quite easy to do so. I have plenty of French friends here. I know in Brittany or Dordogne for example there are so many Anglos that people have found it difficult to integrate. But in the Loire Valley there are not that many so the French here are really keen to talk to me about England and they don’t resent the expats like I have heard they do in other parts of the country.

How did you end up running a restaurant?

I became friends with the owner and had worked with him for four years before he asked me to take over the restaurant in Blois.

What about when you first came over?

After being a hotel manager in England, how did it feel stepping down a level or two?

Obviously it was different, but here I had a different challenge. Whereas in England I had had the challenge of the responsibility, in France the test was to try to learn the new language and new culture and get used to living in a different country, so that made up for the change in position.

What is different about working in France compared to back home?

Well the language is obviously the main thing but working conditions are adhered to a lot more over here. For example in France when someone says they are working nine until six, they will finish at six on the dot. They will not do more than their set hours. And they always take a break here at the precise time they are supposed to. I think in Anglo countries they are more flexible and will often work through a break and take it another time.

Where are the best places to visit in the Loire Valley?

The good thing about living here is that we are in the heart of Chateau country. There are so many around here. Chateau Chambord is probably the most famous one and then there is Chateau Amboise, which is where Leonardo de Vinci lived for a time, and the Chateau in Blois. There is a big museum dedicated to him there. They are all fairly close and that’s the main reason people come here. Tours is the big city near here if you want to go shopping et cetera, and there’s plenty of things to do in Blois as well.

What’s the worst thing about living in the Loire Valley?

The problem living in central France is that you are so far from the sea. It’s about three and a half hours drive either north or west so that’s a real downside of the area. It’s not like we can swim in the Loire river instead. It’s too big and the current is too strong.

And what about the wine?

The wine is a big part of the culture here. The big vineyards are all around us and they are becoming more and more popular. There’s some great wines from the area and a lot of visitors come here to do wine tasting. We try to visit as many as possible and go to the tastings, it's one of the great things about living in this region. Although the wines here are quite regionalized so sometimes it's hard to find ones that are not from the Loire Valley.