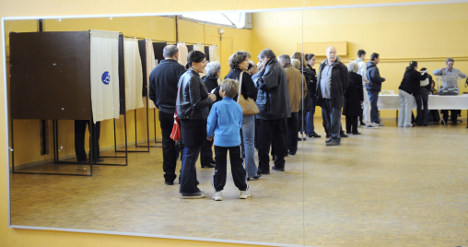 Will foreigners ever get the right to vote in France?

Once again the contentious proposal to allow foreign nationals from outside the EU the right to cast their ballot in local and regional elections appears to have been put to the bottom of the pile.

During his presidential election campaign last year French President François Hollande promised to push through a reform that would bring France into line with most of Europe.

But at his press conference on Thursday, Hollande said the proposal would not be put to the French parliament before the municipal elections in spring 2014.

“I did not submit the text to parliament because I knew the opposition was against it and above all I did not want to give the impression that we are pushing the issue before the 2014 municipal elections,” he told the media.

“After the elections, there will be no issue. It will be submitted to parliament, which will adopt it if it wants to.”

The question of votes for foreigners has long been a hot potato in France, ever since former president François Mitterrand proposed it in the early 1980s.

The policy has been floated in France on several occasions over the last three decades, but has never had enough support for it to become law.

Under the rules of the 1992 Maastricht Treaty, France must allow citizens of an EU member state, who are resident in France, to vote in its local and European elections, but extending those rights to all other foreigners would require further constitutional reform.

Facing a weak economy and an unexpectedly divisive debate over its proposed legalization of gay marriage, there is the theory that Hollande is delaying it the reform because he knows the Socialist government might struggle to gather the popular support – and legislative votes – needed for it to be approved.

Member’s of France’s UMP opposition party have regularly voiced their opposition to any bill that would allow foreigners the right to vote.

“I’m outraged at this, because it would mean giving the right to vote to people who hate France, detest secularism, and reject our laws,” UMP deputy Christian Estrosi has said.

These kind of statements have led rights groups to accuse deputies like Estrosi of racism and discrimination.

"Over the last thirty years, we’ve had four separate attempts [to extend voting rights to all foreigners], and every time, people like [Mr. Estrosi] use this kind of racism to scare off the public,” vice-president of the Ligue des Droits de l'Homme (Human Rights League), Vincent Rebérioux told The Local.