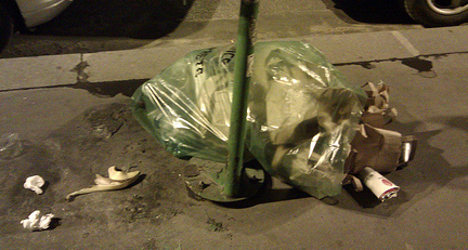 A common sight on the streets of Paris. Photo: Andy Smith

Overflowing bins, flimsy plastic bags that spill their contents and fast food packaging strewn across the street, Paris is well known for its rubbish problem.

City authorities, who have been waging a publicity campaign in recent months, aimed at shaming and encouraging residents to tidy up after themselves, now they have a new weapon in the war on waste.

And as is the case these days this new tool involves the latest technology.

A new smartphone app has been designed that, according to Philippe Ducloux, from the French capital’s office of public services, will “allow Parisians to take part in improving the condition of public spaces."

The ‘Dans Ma Rue’ (on my street) app is set to be launched at the end of June, and will allow ordinary inhabitants to take action when they find themselves in front of an eye sore or a pile of waste somewhere in the city.

Users simply send a photo and the address it was taken at, and submit it using the ‘Dans Ma Rue’ app, which will be available for iPhones and Android devices.

The data straight goes to municipal employees, who send waste management agents to the ‘scene of the grime.’

What do you think? Will this app finally help Paris rid itself of the reputation as one of the dirtiest capital cities in Europe? Let us know in the comments section below.