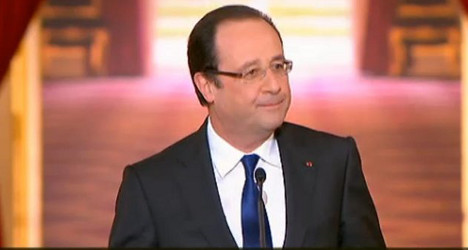 Refresh the page for the latest updates:

Beleaguered French President François Hollande will be forgiven for feeling like he’s walking into the lion’s den on Thursday when he holds his scheduled six-monthly press conference. With France officially in recession the timing could not have been worse.

The president face around 400 hundred blood thirsty hacks in the ballroom of the Elysée Palace on Thursday in which he is expected to be given a right royal grilling by journalists, demanding to know his plans to pull France out of recession.

17:50 – Click Here to read the main points of Hollande's press conference today as he vowed to go "on the offensive" in his second year in power.

17:35 – On the question of votes for foreigners in local elections, that Hollande has promised as part of his election manifesto, the president says it will be put to parliament after the municipal elections in 2014. He denies having ditched the proposal because of opposition from the right.

17:21 Facing questions from journalists now Hollande says the 75 percent tax rate will be included in the budget for 2014. and on the question of his low popularity ratings the president says: "I did not set out to be unpopular. It was not an aim that I set for myself."

Hollande also demands to be judged 'not by the poll, but at the end of his five year's in office".

17:13 Naturally the press conference is being covered by the Tweeters out there. A selection of Tweets so far:

Referring to Hollande's earlier attempt to blame economic situation on previous governments Thibault Renard tweets: Why doesHollande always have to compare with SArkozy. Stop the comparisons and ACT!"

#Hollande giving some hard truths and some questionable responses at the #ConfPR. The French public wont like either #réforme

17:04 – Asked about the leadership of the government Hollande pays tribute to his Prime Minister Jean-Marc Ayrault saying he is "brave, loyal and unselfish. He is simply trying to achieve what I am driving."

16:56 – After Europe, Unemployment and Education, Hollande turns his attention to rioting PSG fans – "What happened in the Trocadero was an attack against the image of France. It was attack on property and on individuals and our lives together and we must find out what the roots of this evil is."

16:50: "France is a peculiar country," says Hollande. "It remains an ongoing project of a society that can surpass itself. France is not the problem, France is the solution," Hollande says as he draws his speech to an end and hands the floor over the journalists.

16:48 – A quote from earlier on Europe: "If Europe does not advance it will fall or even be wiped out from the world map… My duty is to bring Europe out of its lethargy," Hollande says.

16:45: YES, YES, YES – "Can France succeed? Is France still a major nation diplomatically and economically? Can we still succeed in this changing world? I answer Yes! to all these questions."

Hollande issues rallying cry to the nation. Not sure how many people would have the same confidence he has.

16:40: Unemployment: The president vows to cut the number of those who leave school prematurely by half as well as make sure anyone who loses their job has access to some kind of training programme within a matter of months

16:35: Hollande insists the French are "capable of innovating" and to help them he vows to cut red tape. Well that should go down well with everyone.

16:35: He's rattling through his speech now. He's defending the government aim of modernising the country's universities to make them the "best in the world". This policy, controversially included plan to introduce degree courses in the English language.

16:26 : Discussing various initiatives "to give hope back to the people" Hollande keeps stressing the key word "patience". To be fair to him, he has been under the kosh since day one. Not sure he will get any patience though.

16:20 : Hollande says 2nd year in power will see an "offensive" because he realises the what concerns the French people is what is happening now, not last year. The president says he will launch a Europe wide initiative aimed at alleviating crisis

16:18 – The president is in full flow now. He is defending his record in the first year in power and insists the government's economic policies has been proved right.

16:15 – Hollande blames previous governments for their fiscal policies but then says he does not want to shift the blame

16:09 – Hollande takes the microphone in front of packed ranks of journalists to begin his speech 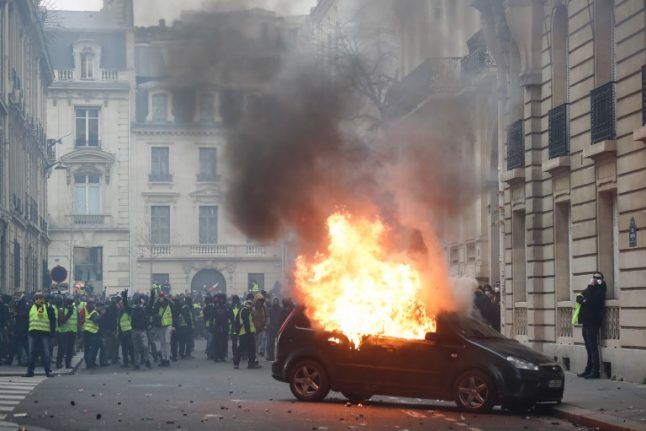