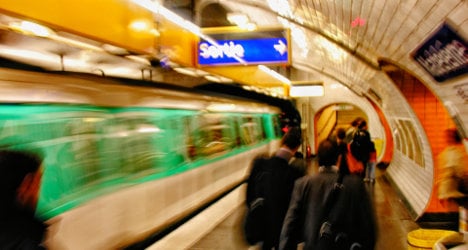 Thieves love "the overcrowded Paris Metro, where pushing, shoving, stumbling and chaos of every variety are always just around the corner." Photo: Thomas Ulrich

You may have seen the movie ‘Oliver’ countless times, and you may have been well warned about pickpockets in Paris before arriving.

But the thieves themselves are only getting more devious and more organized.

With the help of French online magazine 20 Minutes, The Local has assembled some tricks of the thieves' trade that commuters or tourists need to look out for. Here are ten tips on how to avoid getting robbed on the Paris Metro.

1. Listen for the buzzer

Pay particular attention when stopped at a station. As soon as the bell or buzzer sounds, that’s the thief’s cue, and it should be yours too. This noise indicates the doors are about to shut, and the train is moving on to the next station.

The thief needs just a couple of seconds to grab your phone or purse and dart out the door, knowing that before you even realize what’s happening, they’re on the platform waving goodbye as you speed off to the next stop without a chance of catching the culprit.

So try to stand or sit away from doors and gates, or anywhere a thief could make a quick exit, and be vigilant at ticket turnstiles.

2. Take your coffee before you take the train

Paris police have a name for these thieves – ‘the dawn raiders.’ These early birds frequent metro platforms looking for anyone who may not have had a full night’s sleep before heading to work.

The moment they see your eyelids drooping, they do their thing, and you might wake up to find you’ve mysteriously lost a handbag or a wallet. So stay alert.

The same lesson applies to those who may have had one too many to drink. Try to stay as awake and aware as you can, and ideally, go home in groups.

Here’s how it works. You’re standing on a metro platform, and someone walks past, dropping their precious monthly Navigo or ‘carnet’ of tickets on the ground.

Being a normal, well-adjusted, generous human being, you bend over to pick up the ticket and hand it back, and a second thief gets what they can from your back pockets.

This is a tricky one. Sometimes commuters really do drop their tickets, and one day it could be you. Don’t let the Paris Metro make you cold and fearful, but if you see someone drop their ticket, take a step back for an extra few seconds, take a good hard look at the people around you, and if you still feel the need, find a way to do your good deed for the day, without letting a thief ruin it.

You’re pushing through the crowds at Republique or Gare du Nord, making a transfer during rush-hour, when suddenly you hear “Thief!”

Alarmed, you do the most natural thing in the world – you put your hand on the most valuable possession you have on you, to make sure it’s still there.

Great, now the actual thief knows precisely which pockets and which bags to go for.

Screaming matches, fainting spells, and fake fights – a team of clever robbers will do whatever they can to get your undivided attention. While you rubberneck, one of them nips in behind you and takes their pick of your prized possessions.

7. Do you have a moment to make a donation to the thieves of Paris?

Paris police have upped their presence in tourist areas, and are on the look-out for this scam in particular.

You might find them on the street or at the entrance to Metro stations, but be wary of children collecting for fake charities, or 'activists' asking you to sign a petition. It's all a distraction while their accomplice robs you blind.

Giving to a worthy cause, and taking an active interest in a particular campaign or issue are both thoroughly commendable, of course. But basically every charity and petition that exists will have an online presence where you can make your voice heard, or make a secure donation to the cause of your choice.

A good tip for anywhere, really, but especially on the overcrowded Paris Metro, where pushing, shoving, stumbling and chaos of every variety are always just around the corner.

Put your cash, one credit card, and your passport in this well-zipped, properly sealed pouch, strap it around you under your pants or shirt, and you can afford to be a little less paranoid while getting from A to B in the French capital.

9. There are worse things than a stain on your shirt.

Another common routine is for someone to purposely spill a drink, ice-cream, or sauce all over your shirt or jacket. While they apologize profusely, a kindly older lady admonishes them for their carelessness, and starts to mop up the damage with a cloth.

Talking fast and asking you friendly questions, this good samaritan's quick fingers are working overtime under the cloth, mopping up cash, credit cards and wallets along with that chocolate ice-cream.

If anyone spills anything on you, just refuse their help. If you were walking, keep walking. There's nothing rude about this, and it's nothing you can't take care of yourself.

10. Even after taking on board all of this advice your pockets are still being pilfered then Don't shower for a month. You may not make many friends on your commute, but even thieves have discerning noses, and will probably leave you alone, with your possessions (if not your dignity) still intact. Another option is to keep your own hands in your pockets but this will require balance training as the Metro can be quite a bumpy ride and you'll need to hold on to something. You could also walk everywhere or take a Velib.